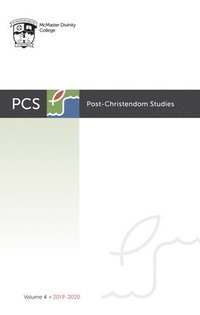 av Studebaker Steven M Studebaker, Beach Lee Beach, Heath Gordon L Heath
Inbunden Engelska, 2020-08-31
339
Köp
Spara som favorit
Skickas inom 10-15 vardagar.
Fri frakt inom Sverige för privatpersoner.
Finns även som
Visa alla 1 format & utgåvor
Post-Christendom Studies publishes research on the nature of Christian identity and mission in the contexts of post-Christendom. Post-Christendom refers to places, both now and in the past, where Christianity was once a significant cultural presence, though not necessarily the dominant religion. Sometimes "Christendom" refers to the official link between church and state. The term "post-Christendom" is often associated with the rise of secularization, religious pluralism, and multiculturalism in western countries over the past sixty years. Our use of the term is broader than that however. Egypt for example can be considered a post-Christendom context. It was once a leading center of Christianity. "Christendom" moreover does not necessarily mean official public and dominant religion. For example, under Saddam Hussein, Christianity was probably a minority religion, but, for the most part, Christians were left alone. After America deposed Saddam, Christians began to flee because they became a persecuted minority. In that sense, post-Saddam Iraq is an experience of post-Christendom--it is a shift from a cultural context in which Christians have more or less freedom to exercise their faith to one where they are persecuted and/or marginalized for doing so.
Visa hela texten