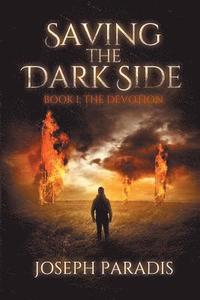 Saving The Dark Side Book 1

Cole was three when he first went missing. He repeatedly vanished for days on end, only to appear back in his bed where his mother left him. The problem was slow to fade, so he grew up isolated from anyone who might get close enough to learn his secret.

By high school the vanishings have all but stopped, and Cole is finally free to claim a life of normalcy. But when faced with a deadly encounter, a mysterious presence appears and takes him away. For good.

He finds himself on Aeneria, an exotic world inhabited by giants, demons, and magic. Cole's arrival reignites an ancient war and unleashes three evil gods, threatening not only Aeneria, but Earth itself. His only hope lies within a sect of warriors who show him the ways of magic, and for the first time in his life, friendship.

In order to save this world and his own, Cole must temper himself in the fires of nightmares, all while trying to find his place in a world where he doesn't belong.
Visa hela texten