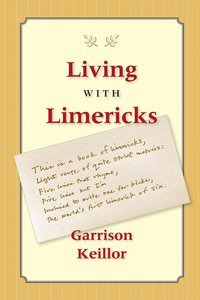 av Garrison Keillor
Häftad Engelska, 2019-11-15
169
Köp
Spara som favorit
Radio personality and author Garrison Keillor delights and astounds in this hybrid memoir/poetry collection that combines anecdotes from his childhood and his "A Prairie Home Companion" years with literary limericks, darkly humorous limericks, extended limericks (aka limericks with porches), and so much more.

Limericks are the poems that can be written in the empty spaces between life, Keillor posits, and this compact book illustrates the full range of the form's utility: thank-you notes to doctors, odes to "Prairie Home" performers, postcard greetings from exotic places, succinct biographies of favorite writers, and scribbles in the margins of Sunday church programs. Readers who have always pined for the perfect limerick hinging on the place name "Schenectady" will at long last be placated. Meanwhile, longtime Keillor fans will gain insight into a whole new side of the bestselling author, whose obsession with limericks goes all the way back to when the bespectacled, lanky youth wearing hand-me-down jeans (from his sister) recited to his Anoka High School class:

There was a young man of Anoka

Who tried to write a great limerick.

He tried and he tried

And some were not bad,

But something seemed to be missing.
Visa hela texten

in Living with Limericks, Garrison Keillor unfurls his whole life in limericks. Since I first discovered Garrison Keillor, I joined millions who have thought him to be a national treasure. Now, it turns out, all the while he was earning that distinction, he was keeping contemporaneous memos in the form of limericks. It’s like finding out there was another floor to Versailles, or that Julia Child left a full freezer, or that there’s a film of Jesse Owens, shot from the other side of the Olympic track, where you can see him flipping Hitler off as he nears the finish line.

leave it to garrison keillor, america’s favorite storyteller, to smuggle into a seemingly innocent collection of limericks the story of his life. mixed in with his fascination with one of the oldest (yet least respected) poetic forms is a straightforward, unabashed autobiography. lift the mask off the man from nantucket, and there’s the author himself…from minnesota! the result is an inventive pastiche, which entertains, charms, reveals, then entertains some more.