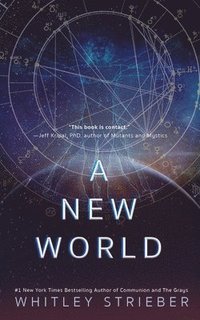 First, there was Communion, the biggest bestseller about alien contact ever published. Now, after 33 years of having them in his life, Whitley Strieber returns with a new vision of contact that has the power to change the world.

The strange entities he wrote about in Communion have been in the lives of the close encounter witnesses now for a generation, but they have remained hidden from most of us.

They are ready for that to change. But it?s up to us.
Visa hela texten

praise for a new world

“whitley strieber’s magical books about his encounters with the uncanny have captured my imagination since childhood. a new world find the master in top form, from a stirring and ultra high strangeness experience at wounded knee to grand speculations about consciousness, communion and the future of humanity. a fascinating, mysterious book.”

--Josh Boone, director of The Fault in Our Stars

“mr. strieber writes with the precious sanity of an intuitive savant. in describing so clearly true experiences that baffle most of us, he opens our minds to accept with grace meanings we need to learn are very real.”

“provocative and riveting. i couldn’t put it down. strieber confronts the mystery of close encounter with fresh insight and depth, wrapping up his years of interaction with the phenomenon he calls “the visitors.” now there is more urgency for contact than ever before, and this book explains how that might happen.”

--leslie kean, investigative reporter and author of surviving death, a journalist investigates evidence for an afterlife

“i entered whitley strieber’s new world and couldn’t put it down. humankind has always wondered what extraterrestrial life would look like, be like, act like. the “visitors” of a new world are unlike anything we have conceived, in other words, they are truly alien. enter this risky new world and leave warned…and empowered.”

Whitley Strieber became a novelist with the publication of The Wolfen in 1980. Since then, he has published over 30 books of fiction and non-fiction. His books The Wolfen, The Hunger, Communion and Superstorm have all been made into films. (Superstorm as The Day After Tomorrow.) His website, Unknowncountry.com is among the largest in the world dealing with paranormal phenomena and his podcast, Dreamland, has been produced weekly for 20 years.

5. The Fields of Asphodel

7. The Return of the Visitors

8. The Man from Paradise

11. The Donation Site and a Word of Caution