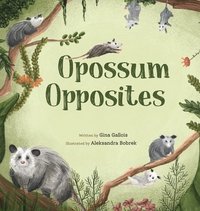 av Gina E Gallois
Inbunden Engelska, 2020-03-03
241
Köp
Spara som favorit
Finns även som
Visa alla 1 format & utgåvor
Ever felt misunderstood? We've all been in that uncomfortable spot where we thought, "If only they knew the real me, things would be different.

They've been underappreciated and misunderstood long enough. These lovable, gentle creatures are simply shy, introverted spirits who avoid the spotlight, but as cleaner-uppers, they are essential to our ecosystem.

Opossum Opposites playfully progresses through the life cycle of one of nature's unsung heroes and teaches readers of all ages about why we should respect and protect them. Readers gain a greater understanding of opossums' importance in the larger ecosystem we all call home.

Each page spread contains a short rhyming poem addressing an opposing pair such as day & night or scary & afraid. Additional information for factoid lovers is clearly separated from the poems for easy selection of age appropriate passages.
Visa hela texten

“I'm so glad people want to teach others about my species, and how important we are to the environment. I hope everyone will learn to love us as much as other wildlife!" - Evinrude O’babs the Opossum

“A delightful and educational book on an often misunderstood marsupial to read with your child!  We can't wait to share this book with our nature center friends.” - Holly Loveland, Dunwoody Nature Center

I'm Gina, a longtime opossum enthusiast who loves to write.

I recently left teaching college French to be at home with my infant daughter and to get serious about my writing. In addition to children's books, I also write humor and personal essays on Medium. One of my most successful articles is called "A Possum's Guide to Making Friends & Influencing People."

I am the proud, incredibly lucky mother of two bilingual children and wife of an adorable Frenchman. That's one of the reasons I am committed to releasing my books in English, French, and Spanish - because I believe in the value of speaking more than one language. Now I need to brush up on my Spanish (a lot) so I can do readings in three languages.

A few of the other hats I wear: dedicated tree-hugger, opossum meme maven, fanatical drinker of Earl Grey tea, world's most uncoordinated Zumba dancer, and admirer of nocturnal animals.

My fascination with opossums began because I felt I could identify with their anxious, introverted nature. I saw a kindred spirit behind those sweet, slightly worried looking pointy faces. It started off innocently enough - I joined opossum groups on Facebook and then started making my own memes...

One thing led to another, and before I knew it, I was writing a children's book. This process has been a lot of fun, a lot of work, and so much learning. I'm absolutely thrilled (and a little terrified) to be putting a little piece of my soul out into the world.