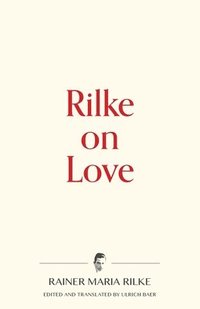 av Rainer Maria Rilke, Ulrich Baer
Häftad Engelska, 2020-02-11
96
Köp
Spara som favorit
Rainer Maria Rilke?s poetry and letters have inspired countless readers around the world with their wisdom and insight into how we can be more than ourselves without recourse to religion, politics, or ideology: through the experiences of art and love. Gathered here for the first time in original translations are Rilke?s candid, piercing, and lyrical reflections on love?the experience he considered paramount for human existence but also, with the exception of death, the event for which we are least prepared. Selected from Rilke?s poetry and his vast correspondence, these passages present Rilke?s contemplations on falling in love, being in love, losing love, and the mystical ways in which love endures.
Visa hela texten

Rainer Maria Rilke (1875-1926) was born in Prague into a German-speaking family. While based in Paris, he traveled broadly until finally settling in Switzerland. Rilke's verse deeply influenced subsequent poets and writers. His Duino Elegies and Sonnets to Orpheus count among the great achievements in world literature. Some of Rilke's letters are available in English as Letters to a Young Poet, Letters on Life, and The Dark Interval. Ulrich Baer holds a BA from Harvard and a PhD from Yale. He is University Professor at New York University, where he teaches literature and photography. He has been awarded Guggenheim, Getty, and Alexander von Humboldt fellowships. A widely recognized expert on poetry and translator, among his books are Rainer Maria Rilke's The Dark Interval, Letters on Life, and Letters to a Young Poet. Other books include Spectral Evidence: The Photography of Trauma, What Snowflakes Get Right: Free Speech, Truth, and Equality on Campus, and other books in the Contemplations series: Nietzsche on Love and Dickinson on Love.