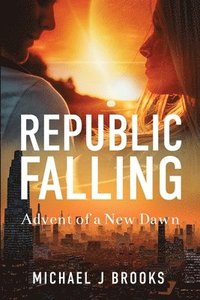 Advent of a New Dawn

av Michael J Brooks
Häftad Engelska, 2021-10-12
209
Köp
Spara som favorit
What happens to your psychological state if you're Linked (joined in mental communion) with your mother as she's atomized from existence? Not too many people get to find out. Randal Scott is one of the unfortunate few, and he wouldn't wish that hell upon anyone. Who would?

Randy enlists into the Commonwealth Defense Force (CDF) to deliver retribution to the man who killed his mother and mentally scarred him for life, his father, Arson Scott. After establishing a wonderful life for his family and nurturing his son into manhood, Arson mysteriously joined the insurgency that threatens to collapse humanity's intergalactic republic and partook in his wife's murder.

Now Randy proceeds with deployment to Colony Four, where his father operates his insurgent faction. Alongside his lover and comrade, whom he shares a Link with, Stacie Spencer, Randy forges ahead with his quest to enact revenge. However, the path to vengeance is not a straightforward one for Randy. He becomes entangled in a web of violent conflict, lies, and conspiracies that have him questioning both of the combat forces in opposition, the CDF and the insurgency known as the Coalition of Rebel Factions.
Visa hela texten

"a satisfying sci-fi thriller, the plot is evenly paced and the conflict is engaging."

"action scenes are exciting and enjoyable."

"the fictional universe . . . features plenty of supporting details and technologies that flesh out the world."

"the characters are . . . presented with a sufficient complexity and internal conflict to help propel the plot and action satisfactorily."

"extraordinary and cohesive, this novel sets a brilliant start to an incredible story. randy is the perfect protagonist for the story. he is decisive, smart, and determined enough to get the job done. he is analytical (a trait you hardly find in science fiction protagonists) and truly observes his situation before taking action. while the topic of the fight between the upper class and the lower, less privileged is a common topic, very few authors have the skill to tackle it with grace and clarity. the author shares even the most minor details to make the story interesting and captivating for readers. author michael j brooks introduces some fantastic technology while keeping everything real and believable (something i loved tremendously). i believe randy has a lot of potential, and the author will fully expand on it in future novels! kudos!"

"michael j brooks has created a well-developed world with Republic Falling: Advent of A New Dawn. You feel for Randal and his plight and though he should seek help over what has happened, he wants to kill the man who murdered his mother, which is understandable. The story moved at a good pace and I enjoyed learning about this new world. There is plenty of action to keep the reader entertained. The author did not overcomplicate the book with long descriptions or a ton of backstory. The glossary at the front helped clear up the basics, allowing the reader to jump straight into the story. I think it would be enjoyed by sci-fi fans and possibly thriller fans too as there is a lot going on in the story. I would recommend it."

"Republic Falling: Advent of a New Dawn imagines a groundbreaking scientific procedure that can cerebrally link one person to another. Michael J. Brooks explores the sharing of thoughts, emotions, and memories through the implantation of a nanochip beyond human ingenuity that has a neorealist effect to it. It makes you ponder if the distant future can make it happen. The idea of revenge as the driving emotion that boosts the plot makes this novel plausible, as Randal is seized with a seemingly reasonable obsession to avenge his mother against a man that he used to look up to. During the course of the story, the plot moves freely but certainly in the direction where it wants to go. Despite its heavy military element, <...

Michael J. Brooks holds a BA in art and an MFA. He is a member of the Independent Book Publishing Professionals Group (IBPPG), and his first novel, Exodus Conflict, was a finalist of the 2013 Next Generation Indie Book Awards, in the sci-fi/fantasy category; earned honorable mention from the 2013 London Book Festival, in the science fiction category; and received five stars from Readers' Favorite. As he currently tries to balance his busy life in Washington, DC, he seeks to write fiction novels which are not meant to be only entertainment but to address some of the most crucial issues of our time and explore the trials of being human. He hopes to create characters that people can relate to and stories that will have an impact on them long after they are finished reading one of his novels.