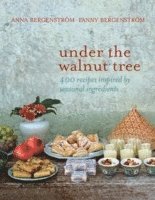 Under the Walnut Tree

Great Recipes from Our Kitchen

av Anna Bergenstrom, Fanny Bergenstrom
Häftad Engelska, 2014-10-01
189
Bevaka
Spara som favorit
Tillfälligt slut – klicka "Bevaka" för att få ett mejl så fort boken går att köpa igen.
This gorgeous and succesful book is now available in a paperback edition! Sweden's most famous cooking family take you on a culinary global adventure; from Spain to Thailand, avocados to cardamom, Under the Walnut Tree is a beautiful collection of recipes showcasing Anna and Fanny Bergenstrom's favourite foods. Each of the 17 chapters is dedicated to a different ingredient and includes simple recipes that have an emphasis on freshness and flavour. You will find recipes to suit all tastes: quesadillas from Mexico or Kerala-style chickpeas, rum-baked mangoes from the Caribbean or Moroccan mint tea. With dishes for breakfast, lunch and dinner, you will be inspired to create, taste and enjoy the delights of your favourite ingredients in this gorgeous and accessible cookbook. Drawing on Anna's wealth of experience and Fanny's design skills and stunning photography, Under the Walnut Tree is guaranteed to become a kitchen favourite you return to again and again.
Visa hela texten

Anna Bergenstrom is one of Sweden's most famous and cherished food writers. Her cookbooks have been a staple in Swedish homes for nearly 40 years. She has published 15 cookbooks and sold millions of copies in Scandinavia and worldwide. Anna's cooking style is influenced by her childhood years spent in Provence, France and her home country, Sweden. In 2002 Anna was appointed a title of honour for her contributions to Swedish food culture. Fanny Bergenstrom, Anna's daughter, is a successful food and travel photographer who collaborates with Anna on many of her cookbooks. Fanny contributes food ideas and recipe inspirations from the places she visits as well as designing and photographing Anna's books.