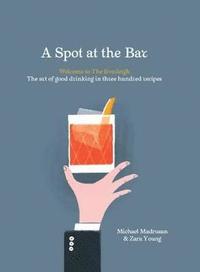 A Spot At The Bar

Welcome to The Everleigh

av Michael Madrusan, Zara Young
Inbunden Engelska, 2016-11-01
239
Köp
Spara som favorit
Skickas inom 7-10 vardagar.
Fri frakt inom Sverige för privatpersoner.
Join the internationally acclaimed team from The Everleigh for an evening of good drinking, festive hosting and classic style. From an aperitif at sundown, a nightcap in the early hours, right through to a hair of the dog the morning after, we invite you on a wild and romantic journey in celebration of the golden era of drinking and entertaining. With more than three hundred recipes for fond and forgotten classic cocktails, including our favourite variations, A Spot at the Bar is an extension of the Everleigh experience and a chance to get up close and personal with everything we know and love. It is much more than just a cocktail book. It reflects this golden era cocktail bar's sophisticated vibe and style of drinking, as well as offering a how-to guide to other elements of the social experience. "His Style" and "Her Style" chapters include functional fashion hints and tips on shoe styles and accessories. The how-to guides strike a playful, yet informed tone, in a bid to help you put your best foot forward, whatever the occasion.In Michael's words: "In appreciating the quality of their drink, the glassware in which it is served and the decor of the venue in which they frequent, the consumer is forced to critique everything from the appropriateness of their Friday night attire to their core values in work and leisure. " Now you just need to find a spot at the bar...
Visa hela texten

"The book's greatest strength is its accessibility-300-bottle backbar not required.forgoing the formulaic structure of many cocktail books today: drink beauty shot, cocktail headnote, cocktail recipe. Instead, each hero drink is illustrated with its specs written on an old business card, coaster or matchbook from a notable bar, and is then followed by an illustration and a page full of recipes inspired by that drink. It's unexpected, and it works-drawing important connections between classics and their modern counterparts." -PUNCH magazine

Bloggat om A Spot At The Bar

Michael Madrusan is the founder of The Everleigh and The Elk Room, a goldenera cocktail bar overlooking Melbourne's Gertrude Street, Fitzroy. The Everleigh, which opened on 4th July 2011, was named Bar of the Year by Gourmet Traveller in 2013, Time Out's Cocktail Bar of the Year 2014, Bar of the Year 2015 and Cocktail Bar of the Year 2016. The Everleigh has also placed in the highly coveted Drinks International's World's 50 Best Bars list 2013, 2014 and 2015. Michael spent many years bartending in London and New York before returning home to Australia to open the country's first and only outpost of the Milk & Honey family. He has worked in some of the most revered bars in the world, including New York's Milk & Honey, Little Branch and PDT. Zara left London in 2013 and began working with Michael on the growth and development of The Everleigh family. Zara completed her Masters in Theatre & Performance Studies at King's College London, specialising in immersive events and the relationship between hospitality and the arts industry. Before leaving London Zara worked as host and events manager for the Experimental Cocktail Club group, as well as in production and marketing for popular immersive theatre/film company, Future Cinema. In January 2015, The Everleigh launched Navy Strength Ice Co., Australia's first hand-cut ice company, supplying Melbourne's bars and restaurants with crystal clear spears and blocks. In May 2015 The Everleigh Bottling Co. was introduced, offering beautifully packaged ready-to-drink classic cocktails to stores, hotels, restaurants and bars across Australia. In August 2015, Michael opened his second venue, Heartbreaker, in Melbourne's CBD. Inspired by the classic, much-loved bars of Los Angeles, this good-time bar pumps out classic rock and great booze until the early hours. Michael was included in The Age's Top 100 Most Influential People of 2012 and nominated for International Bartender of the Year at Tales of the Cocktail, New Orleans 2012.