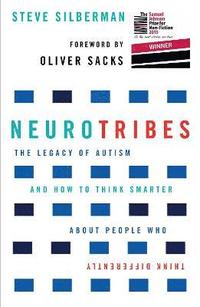 av Steve Silberman
(1 röst)
Häftad Engelska, 2016-02-25
199
Köp
Spara som favorit
Finns även som
Visa alla 1 format & utgåvor
Winner of the 2015 Samuel Johnson Prize for Non-Fiction Shortlisted for the Wellcome Book Prize A Sunday Times and New York Times bestseller Foreword by Oliver Sacks What is autism: a devastating developmental condition, a lifelong disability, or a naturally occurring form of cognitive difference akin to certain forms of genius? In truth, it is all of these things and more - and the future of our society depends on our understanding it. Following on from his groundbreaking article 'The Geek Syndrome', Wired reporter Steve Silberman unearths the secret history of autism, long suppressed by the same clinicians who became famous for discovering it, and finds surprising answers to the crucial question of why the number of diagnoses has soared in recent years. Going back to the earliest autism research and chronicling the brave and lonely journey of autistic people and their families through the decades, Silberman provides long-sought solutions to the autism puzzle while casting light on the growing movement of 'neurodiversity' and mapping out a path towards a more humane world for people with learning differences.
Visa hela texten

Stunning... Highly original... Outstanding. * Spectator, Best Books of 2015 * A sprawling and fascinating dissection of the role autism has played in shaping human history. * Daily Telegraph, Best Books of 2015 * Whatever the future of autism...Mr Silberman has surely written the definitive book about its past. * The Economist, Best Books of 2015 * A rich amalgam of social history and contemporary reportage. * Financial Times, Best Books of 2015 * [An] epic history of autism. * Sunday Telegraph * Ambitious, meticulous and largehearted... Beautifully told, humanizing, important. * New York Times, Best Books of 2015 * Silberman's phenomenal book goes a long way to uncovering some of the myths about this particular "tribe" and is all for recognising their incredible talents and contributions to society. * The Sun * Brilliant and sparklingly humane. * Guardian, Best Books of 2015 * NeuroTribes is deeply felt. * The Times, Best Books of 2015 * Powerful, authoritative... This is a significant book. * The Sunday Times, Best Books of 2015 * It's not just a book about autism but a journey through the history of cognitive difference and our evolving attitudes towards it. * Metro, Best Books of 2015 * Silberman sheds a sage and humane light on a much-misrepresented aspect of human nature. * Independent, Best Books of the Year * Steve Silberman explores in fascinating, near-encyclopaedic depth how autism has evolved. It's a gripping narrative written with journalistic verve. * Observer * Silberman is a skilled storyteller... [He] researches with scientific rigour... A powerful voice: NeuroTribes offers keen insight. * New Statesman * Silberman's sweeping history is always sensitive and builds a persuasive argument that the ability to think differently is useful, necessary even, for the success of the modern world. * New Scientist * This excellent book is the result of fifteen years of work. As the late Oliver Sacks put it, "I know of no one else who has spent so much time simply listening, trying to understand what it is like to be autistic." -- William Leith * Evening Standard, Best Books of 2015 * A tome that beautifully, compassionately and brutally traces the history of autism from centuries past into the present and possible future... Everyone needs to read this book. Everyone. * Forbes * NeuroTribes is remarkable. Silberman has done something unique: he's taken the dense and detailed history of autism and turned the story into a genuine page-turner. The book is sure to stir considerable discussion. -- John Elder Robison, author of Look Me in the Eye A lively, readable book... To read NeuroTribes is to realize how much autistic people have enriched the scope of human knowledge and diversity, and how impoverished the world would be without them. * San Francisco Chronicle, Best Books of 2015 * A comprehensive history of the science and culture surrounding autism studies... An essential resource. * Nature magazine * Breathtaking... As emotionally resonant as any [book] this year. * The Boston Globe, Best Books of 2015 * It's a readable, engaging story. But it's also a serious political and sociological critique, couched in a 500-page-long piece of original historical scholarship. * Salon * Nothing short of a revelation... Sweeping and lovingly detailed. * Parent.co * The monks who inscribed beautiful manuscripts during the Middle Ages, Cavendish an 18th century scientist who explained electricity, and many of the geeks in Silicon Valley are all on the autism spectrum. Silberman reviews the history of autism treatments from horrible blaming of parents to the modern positive neurodiversity movement. Essential reading for anyone interested in psychology. -- Temple Grandin, author of Thinking in Pictures and The Autistic Brain It is a beautifully written and thoughtfully crafted book, a historical tour of autism, richly populated with fascinating and engaging characters, and a rallying call to respect difference. * Scien

Steve Silberman is an award-winning investigative reporter and has covered science and cultural affairs for Wired and other national magazines for more than twenty years. His writing has appeared in The New Yorker, TIME, Nature and Salon.