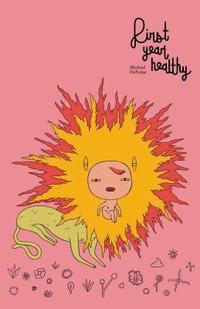 av Michael Deforge
Inbunden Engelska, 2014-11-27
135
Köp
Spara som favorit
Specialorder (osäker tillgång). Skickas inom 11-20 vardagar.
Gratis frakt inom Sverige över 159 kr för privatpersoner.
Finns även som
Visa alla 1 format & utgåvor
First Year Healthy purports to be the story of a young woman, recently released from the hospital after an outburst, and her burgeoning relationship with an odd, perhaps criminal Turkish immigrant. In a scant thirty-two pages, working with a vibrant, otherworldly palette of magentas, yellows, and greys, Michael DeForge brings to life a world whose shifting realities are as treacherous as the thin ice its narrator walks on. First Year Healthy is all it appears to be and more: a parable about mental illness, a folk tale about magical cats, and a bizarre, compelling story about relationships. Michael DeForge's singular voice and vision have, in a few short years, rocketed his work to the apex of the contemporary comics canon. Ant Colony was his first book with Drawn and Quarterly: it appeared on the New York Times Graphic Bestseller list and was lauded by the Chicago Tribune, Globe and Mail, and Harper's Magazine. His effortless storytelling and eye for striking page design make each page of First Year Healthy a fascinating puzzle to be unravelled. First Year Healthy is knotty and mysterious - it demands to be read and reread.
Visa hela texten

Michael DeForge was born in 1987 and grew up in Ottawa, Ontario. After a few years of experimenting with short strips and zines, he created Lose #1, his first full-length comic, which won Best Emerging Talent at the Doug Wright Awards. He has since published a handful of comic books, which have received industry praise and two Eisner Award nominations. His illustrations have been published in the New York Times and Bloomberg View; his comics have appeared in the Believer, Maisonneuve, and the Adventure Time comic book series. Ant Colony, his first book with Drawn and Quarterly, was on the New York Times Graphic Bestseller list.