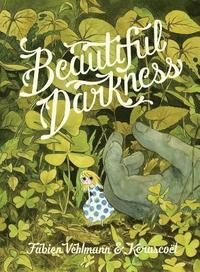 av Fabien Vehlmann, Kerascoet
(1 röst)
Häftad Engelska, 2018-10-30
189
Köp
Spara som favorit
Kan levereras innan julafton!
Newly homeless, a group of fairies find themselves trying to adapt to their new life in the forest. As they dodge dangers from both without and within, optimistic Aurora steps forward to organize and help build a new community. Slowly, the world around them becomes more treacherous as petty rivalries and factions form. Beautiful Darkness became a bestseller and an instant classic when it was released in 2014. This paperback edition of the modern horror classic contains added material, preparatory sketches, and unused art. While Kerascoet mix gorgeous watercolors and spritely cartoon characters, Fabien Vehlmann takes the story into bleaker territory as the seasons change and the darkness descends. As with any great horror, there are moments of calm and jarring shocks while a looming dread hangs over the forest.
Visa hela texten

Kerascoet is a husband-and-wife cartooning team who have produced several less terrifying comics for the French market as well as making recent forays into North American children s books. Fabien Vehlmann is a French comics writer who has been nominated for the Angouleme International Comics Festival Award a number of times. He is best known to North American audiences for his collaboration with the Norwegian cartoonist Jason on Isle of 100,000 Graves.