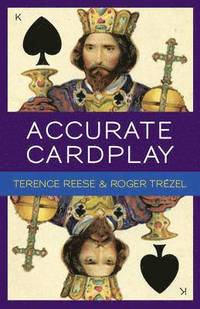 av Terence Reese, Roger Trezel, Mark Horton
Häftad Engelska, 2015-01-08
139
Köp
Spara som favorit
Skickas inom 5-8 vardagar.
Fri frakt inom Sverige för privatpersoner.
In the 1970s, two of the best bridge writers of all time collaborated on a series of eight small books on aspects of card play at bridge. These books have long been out of print, and are being republished now in two combined volumes, edited and updated by Bridge Magazine editor Mark Horton. Accurate Card Play is the first of these two books, and comprises the following titles from the original series: Safety Plays in Bridge; Blocking and Unblocking Plays in Bridge; Elimination Play in Bridge; When to Duck and When to Win in Bridge.
Visa hela texten

Terence Reese (1913-1996, UK) was a World Champion and one of the best-ever writers on the game. His Reese on Play and The Expert Game are classics of bridge literature. Roger Trezel (1918-1986, France) was a multiple world champion. His partnership with Pierre Jais is regarded as one of the greatest in the history of the game. Mark Horton is a British bridge journalist and former chess champion. He currently lives in Bath. Bridge Magazine is the world's oldest bridge magazine and is published in the London by Chess & Bridge Ltd.