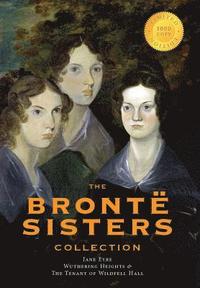 av Charlotte Bronte, Emily Bronte, Anne Bronte
Inbunden Engelska, 2019-02-26
629
Köp
Spara som favorit
In the second half of the 19th century, Charlotte Brontë?s Jane Eyre was considered the best of the Brontë sisters? works, but following later re-evaluation, critics began to argue that Emily Brontë?s Wuthering Heights was superior. However, Anne, the least known Brontë sister, was not given a chance to compete with her siblings. Despite the fact that The Tenant of Wildfell Hall was an instant and phenomenal success, its re-publication was prevented by Charlotte Brontë after Anne?s death in 1849. This edition includes all three novels, and is limited to 1,000 copies.

The Brontës were a nineteenth-century literary family, born in Thornton England. The sisters, Charlotte, Emily, and Anne, are well known as poets and novelists. Like many contemporary female writers, they originally published their poems and novels under male pseudonyms: Currer, Ellis, and Acton Bell. Their stories immediately attracted attention for their passion and originality. Charlotte?s Jane Eyre was the first to know success, while Emily?s Wuthering Heights, and Anne?s The Tenant of Wildfell Hall were later to be accepted as masterpieces of literature.
Visa hela texten

Charlotte Bront (21 April 1816 - 31 March 1855) was an English novelist and poet, the eldest of the three Bront sisters who survived into adulthood and whose novels became classics of English literature.

She enlisted in school at Roe Head in January 1831, aged 14 years. She left the year after to teach her sisters, Emily and Anne, at home, returning in 1835 as a governess. In 1839, she undertook the role as governess for the Sidgwick family, but left after a few months to return to Haworth where the sisters opened a school, but failed to attract pupils. Instead they turned to writing and they each first published in 1846 under the pseudonyms of Currer, Ellis and Acton Bell. Her first novel, The Professor was rejected by publishers, her second novel Jane Eyre was published in 1847. The sisters admitted to their Bell pseudonyms in 1848, and by the following year were celebrated in London literary circles.

Bront experienced the early deaths of all her siblings. She became pregnant shortly after her marriage in June 1854 but died on 31 March 1855 of tuberculosis or possibly typhus. Emily Jane Bront (30 July 1818 - 19 December 1848) was an English novelist and poet who is best known for her only novel, Wuthering Heights, now considered a classic of English literature. Emily was the third-eldest of the four surviving Bront siblings, between the youngest Anne and her brother Branwell. She published under the pen name Ellis Bell.

Wuthering Heights's violence and passion led the Victorian public and many early reviewers to think that it had been written by a man.According to Juliet Gardiner, "the vivid sexual passion and power of its language and imagery impressed, bewildered and appalled reviewers." Literary critic Thomas Joudrey further contextualizes this reaction: "Expecting in the wake of Charlotte Bront's Jane Eyre to be swept up in an earnest Bildungsroman, they were instead shocked and confounded by a tale of unchecked primal passions, replete with savage cruelty and outright barbarism." Even though the novel received mixed reviews when it first came out, and was often condemned for its portrayal of amoral passion, the book subsequently became an English literary classic. Emily Bront never knew the extent of fame she achieved with her only novel, as she died a year after its publication, aged 30.

Although a letter from her publisher indicates that Emily had begun to write a second novel, the manuscript has never been found. Perhaps Emily or a member of her family eventually destroyed the manuscript, if it existed, when she was prevented by illness from completing it. It has also been suggested that, though less likely, the letter could have been intended for Anne Bront, who was already writing The Tenant of Wildfell Hall, her second novel. Anne Bront (17 January 1820 - 28 May 1849) was an English novelist and poet, the youngest member of the Bront literary family.The daughter of Patrick Bront, a poor Irish clergyman in the Church of...