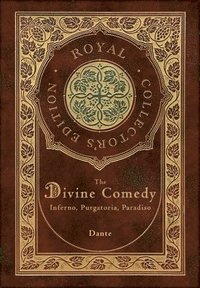 Inferno - Inferno begins with Dante lost in a dark wood, assailed by beasts he cannot evade, and unable to find the straight way to salvation. Conscious that he is ruining himself and that he is falling into a dark place, Dante is at last rescued by Virgil, and the two of them begin their journey to the underworld. Allegorically, the Inferno represents the Christian soul seeing sin for what it really is, and the three beasts represent three types of sin: the self-indulgent, the violent, and the malicious.

Purgatoria - Having survived the depths of Hell, Dante and Virgil ascend out of the undergloom to the Mountain of Purgatory on the far side of the world. The mountain has seven terraces, corresponding to the seven deadly sins. Dante's illustrative examples of sin and virtue draw on classical sources as well as on the Bible and on contemporary events.

Paradiso - After an initial ascension, Beatrice guides Dante through the nine celestial spheres of Heaven. These are concentric and spherical, as in Aristotelian and Ptolemaic cosmology. The structure of Paradiso is based on the four cardinal virtues and the three theological virtues. In Paradiso, Dante meets and converses with several great saints of the Church, including Saint Peter, and St. John. Allegorically, the poem represents the soul's ascent to God.

Durante di Alighiero degli Alighieri, commonly known by his pen name Dante Alighieri or simply as Dante, was an Italian poet. His Divine Comedy, originally called Comeda (modern Italian: Commedia) and later christened Divina by Giovanni Boccaccio, is widely considered the most important poem of the Middle Ages and the greatest literary work in the Italian language.

In the Late Middle Ages, most poetry was written in Latin, making it accessible only to the most educated readers. In De vulgari eloquentia (On Eloquence in the Vernacular), however, Dante defended the use of the vernacular in literature. He would even write in the Tuscan dialect for works such as The New Life (1295) and the Divine Comedy; this highly unorthodox choice set a precedent that important later Italian writers such as Petrarch and Boccaccio would follow.

Dante was instrumental in establishing the literature of Italy, and his depictions of Hell, Purgatory and Heaven provided inspiration for the larger body of Western art. He is cited as an influence on John Milton, Geoffrey Chaucer and Alfred Tennyson, among many others. In addition, the first use of the interlocking three-line rhyme scheme, or the terza rima, is attributed to him. He is described as the "father" of the Italian language, and in Italy, he is often referred to as il Sommo Poeta ("the Supreme Poet"). Dante, Petrarch, and Boccaccio are also called the tre corone ("three crowns") of Italian literature.