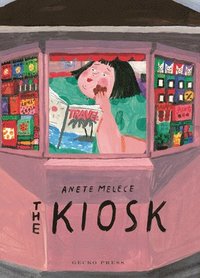 av Anete Melece
Inbunden Engelska, 2020-10-01
137
Köp
Spara som favorit
An unexpected and original picture book about being stuck and finding a way to get free For years, the kiosk has been Olga's life. She spends her days inside reading travel magazines and dreaming of distant places. One day a chance occurrence turns her upside down-literally-and sets her off on an unexpected journey. The Kiosk is a warm and curious story about someone who is stuck finding a way to be free. The story was originally produced as a short animation which gained international recognition and was selected for over 100 festivals around the world.
Visa hela texten

Apple-cheeked Olga, an adult, has worked and lived in her street corner kiosk for a long, long time. Maybe too long as she has grown too large to exit her workplace. As the busy city swirls around her, she sells magazines, water, and more to her regulars whose habits she knows well. At night she shutters her kiosk and settles into her comfy purple chair to wistfully read about faraway places. One day through a series of mishaps, Olga discovers she can lift the kiosk and walk around with it as though it were a dress. While wandering the city, her feet get tangled in the dog leash of one of her regulars, and she falls into the river. Luckily the kiosk keeps Olga afloat as the river carries her out to sea, where she peacefully floats for three days before washing ashore. Now she happily sells ice cream from her kiosk on the seashore and watches splendid sunsets every evening. Olga is pink-skinned, as is nearly everyone depicted. Melece's text works seamlessly with her colorful, light-hearted, cartoony illustrations. Her use of various perspectives, panel types, and white space creates a dynamic flow to the story which keeps it moving along. It is no surprise that this story and illustrations are taken almost directly from the Latvian author's 2013 animated short film. A QR code and link to it can be found on the title page.VERDICT Educators may have to decide whether this is a charming story of accidentally following your dreams, or a problematic take on a woman eating her emotions. Purchase as needed.--School Library Journal -- "Journal" The most captivating and original book here, and my favorite, is the Latvian artist Anete Melece's The Kiosk. It began life as a six-minute animated short, which won prizes at film festivals around the world. Olga, the main character, is a large, likable woman who lives, works, eats and sleeps in her kiosk. Unable to leave it when her workday ends because she can't squeeze through the narrow door, she spends her evenings eating, reading travel magazines and dreaming of 'distant seas with splendid sunsets.' In a further absurdist twist, Olga's world is literally turned upside down when her kiosk tips over. Righting herself, she realizes she doesn't have to stay in the city; she can go anywhere. It's an Alice-in-Wonderland moment, with a giant Olga carrying the kiosk on her shoulders through the city's busy streets. Eventually Olga and kiosk arrive at the seashore, where she goes into business selling ice cream and watching the sunset every night. The pictures of Olga are wonderfully inventive and strange, done in bright colors reminiscent of Matisse paintings. A parable for our time, 'The Kiosk' is about escaping a confining routine and finding something better, about being 'stuck, ' as Melece herself has described it, and figuring out a way to 'start a journey to your happy place exactly as you are.'--The New York Times -- "Newspaper"