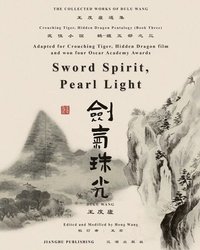 av Dulu Wang, Hong Wang
Häftad Kinesiska, 2021-04-10
259
Köp
Spara som favorit
Dulu Wang (1909-1977) was a famous Chinese Chivalry (Martial Art) novelist in the nineteen thirties and forties who wrote many novels including Crane-Iron Pentalogy (Dancing Crane, Singing Phoenix aka, 1940; Precious Sword, Golden Hairpin, 1938; Sword Spirit, Pearl Light, 1939; Crouching Tiger, Hidden Dragon , 1941; and Iron Knight, Silver Vase , 1942) which was adapted into a film under the title "Crouching Tiger, Hidden Dragon"by Ang Lee and his colleagues in 2000. Its spectacular action, rhapsodic landscapes and tragic romance have touched audiences in Asia, North America and around the world and won over 40 awards and was nominated for 10 Academy Awards, including Best Picture, and won Best Foreign Language Film, Best Art Direction, Best Original Score and Best Cinematography. In 2019, the film was ranked the 51st in 100 best films of the 21st century list by Guardian.

Dulu Wang is considered one of the five greatest wuxia (which literally means "martial hero") fiction writers of the Northern School in the Republican. He was less interested in writing about ruthless killings; instead he focused on his characters' development, their emotions, friendship, and passions. Wang had great sympathy for women who suffered cruel oppression by the society and its feudal system, and his novels featured many strong female characters, warriors, and heroines. Most of his stories featured tragic endings. His perfect combination of chivalry, romance and tragedy in his novels have thrilled many critics and readers and this style have influenced many authors.

During 1925-1949 Wang published more 90 novels and thousands of articles and poems.

This book, Sword Spirit, Pearl Light, is Volume 3 of Wang's Crane-Iron Pentalogy and was published in 1939 and edited and modified by Hong Wang in 2020.

More Wang's books will be published in the Collected Works of Dulu Wang series.

wang dulu, despite being dismissed as a nonserious retrograde writer by leftist literary historians for several decades, was an aspiring cosmopolitan, who was sensitive to the resonance between the so-called progressive new ideas and certain existing elements of china's composite, heterogeneous tradition. rather than resist the drastic social changes and shifting values occurring in his time, he creatively revised the narrative conventions about chivalrous women in china's longstanding tradition of fantasy literature, thus making tradition relevant for the times. this work also rendered western-imported ideas about female independence, profession, and mobility familiar and palatable to ordinary urban readers. his work instantiates the synthesis of a quintessential national art form-the martial arts fantasy-and transnational ideas of women's liberation.