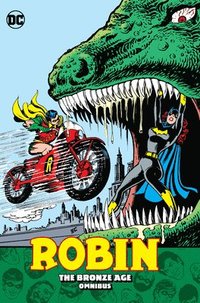 av Gardner Fox, Bob Haney
Inbunden Engelska, 2020-03-31
979
Köp
Spara som favorit
Skickas inom 5-8 vardagar.
Fri frakt inom Sverige för privatpersoner.
In these stories from the late 1960s and the 1970s, Robin has moved out from the shadow of Batman to attend college, where he continues to battle crime. Collecting dozens of stories from BATMAN, DETECTIVE COMICS, BATMAN FAMILY and more, this hardcover includes tales in which Robin deals with bullying, motorcycle gangs, campus speech and much more.
Visa hela texten

As much as any writer, Gardner Fox helped create the tone and feel of the Batman stories of the 1960s. Fox was an attorney who began his prolific and innovative second career as a writer in the late 1930s on Batman and went on to create such Golden Age classics as the original Flash, Hawkman, Starman, Doctor Fate and the Justice Society of America. His influence extended throughout the 1950s and 1960s when, until his retirement from DC Comics in 1968, he created and/or wrote such memorable features as the Justice League of America, Adam Strange, the Atom, Hawkman, and, of course, Batman, all under the auspices of legendary comics editor Julius Schwartz. Until his death in 1986, Gardner Fox continued writing comics and novels. He published over 100 books in numerous genres, some under the pseudonyms of Jefferson Cooper and Bart Sommers, as well as many fantasy novels under his own name.