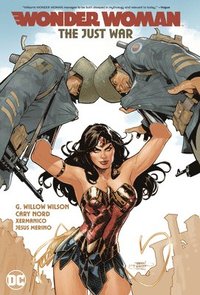 av G Willow Wilson
Inbunden Engelska, 2019-10-29
219
Köp
Spara som favorit
Skickas inom 5-8 vardagar.
Fri frakt inom Sverige för privatpersoner.
Finns även som
Visa alla 1 format & utgåvor
A new era of Wonder Woman begins as best-selling, Hugo Award-winning and Ms Marvel writer G. Willow Wilson makes her return to DC! Far below Themyscira, Ares, the God of War, has been imprisoned for generations, repenting his past sins. But his new cellmate Grail may have an unexpected effect on him...and the plan they've come up with will change Themyscira--and the world--forever! When Wonder Woman rushes to eastern Europe to rescue Steve Trevor from a mission gone wrong, she'll find herself face to face with a very new, very different God of War. It's true, Ares has been reborn on Earth--but has he changed for the better? Of all the role models in the world, he seems to have chosen...Wonder Woman?! Diana and Steve Trevor better watch their backs, because Ares isn't the only creature of myth to find his way to Man's World...and he's not the only resurrected Olympian either. Collects Wonder Woman #58-65.
Visa hela texten

"Amazing."--Entertainment Weekly "A transformative resurrection."--Polygon "Wilson's Wonder Woman manages to be both steeped in mythology and relevant to today."--Vogue "The most prominent female superhero in the canon."--New York Times

Willow is the author of the New York Times best-selling comic book series Ms Marvel, winner of the 2015 Hugo Award for Best Graphic Story. Her first novel, Alif the Unseen, was a New York Times Notable Book of 2012, longlisted for the Women's Prize for Fiction (formerly the Orange Prize) and winner of the World Fantasy Award for Best Novel. At San Diego Comic Con, it was announced that Willow would take over writing duties on the ongoing Wonder Woman comic book series in November 2018. Willow was born in New Jersey and attended high school in Colorado. After converting to Islam in 2003 at age 20, Willow spent the next several years living in Egypt and studying religion and Arabic. Her work often addresses the fault lines between tradition and pop culture. She currently lives in Seattle with her husband and two children.