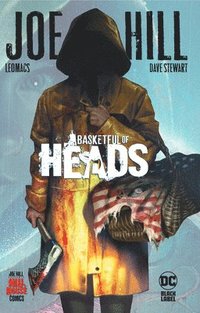 av Joe Hill
(1 röst)
Inbunden Engelska, 2020-09-08
240
Köp
Spara som favorit
Finns även som
Visa alla 1 format & utgåvor
June Branch visits her boyfriend, Liam, on Brody Island for a relaxing last weekend of summer. After an escaped group of criminals breaks into the house that June and Liam are watching, Liam is taken by them. June grabs a strange Viking axe and flees from the intruders. When one of the attackers finds her, she swings the axe and takes off his head, which rolls away and begins to babble in terror. For June to uncover the truth, she'll need to hear the facts straight from the mouths of her attackers, with...or without their bodies attached.
Visa hela texten

Joe Hill is the #1 New York Times bestselling author of The Fireman and Heart-Shaped Box. His second novel, Horns, was made into a feature film starring Daniel Radcliffe; his third, NOS4A2, is forthcoming as a TV series from AMC. His book of short stories, 20th Century Ghosts, won the Bram Stoker Award and British Fantasy Award for Best Collection. His most recent work, Strange Weather, a collection of novellas, was published in the autumn of 2017. He earned the Eisner Award for Best Writer for his long-running comic book series, Locke and Key, featuring the eye-popping art of Gabriel Rodriguez. Look for that one as a Netflix show in the not-too-distant future.