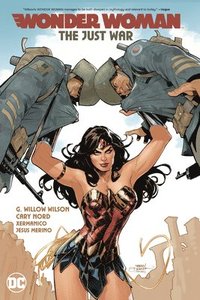 av G Willow Wilson, Cary Nord
Inbunden Engelska, 2020-06-02
179
Köp
Spara som favorit
Skickas inom 5-8 vardagar.
Gratis frakt inom Sverige över 159 kr för privatpersoner.
Finns även som
Visa alla 1 format & utgåvor
War. For humankind, it is the oldest and deadliest enemy there is. And for Diana of Themyscira, the same is true...almost. Because to the Amazon Princess, war is not just an impersonal force of destruction. War is a god-a god named Ares. And Ares is back. Resurrected after years of oblivion, this young god has emerged once more to shake the world to its very foundations. But Ares is still impressionable, still able to be molded into something less cruel and more just...if he has the right mentor. He has chosen Wonder Woman. And now Wonder Woman must make a choice of her own. Can Diana reform Ares wicked ways? Or will she and everyone she cares about learn the hard way that there's no such thing as a just war?
Visa hela texten

G. Willow Wilson is the author of the acclaimed novel THE BIRD KING (2019), co-creator of the Hugo and American Book Award-winning series MS. MARVEL (2013-2018), and has written for some of the world s best-known superhero comic book series, including THE X-MEN, SUPERMAN and WONDER WOMAN. Her first novel, ALIF THE UNSEEN, won the 2013 World Fantasy Award for Best Novel, was a finalist for the Centre For Fiction s First Novel Prize, and was long-listed for the 2013 Women s Prize for Fiction. In 2015, she won the Graphic Literature Innovator Prize at the PEN America Literary Awards. Her work has been translated into over a dozen languages. She lives in Seattle.