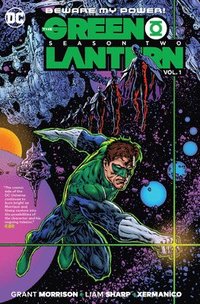 av Grant Morrison, Liam Sharp
Inbunden Engelska, 2020-12-01
279
Köp
Spara som favorit
After the Blackstar incursion, Hal Jordan and his fellow Green Lanterns are left to put the world back together again after the battles that weakened the Green Lantern Corps to less than a shred of what it once was. His next mission is his most critical he needs to find the next generation of cosmic immortals. Will Hal be able to find the new heroes the world needs? Or will new threats keep him from completing his mission?
Visa hela texten

Writer Grant Morrison is known for his innovative work on comics from the graphic novel Batman: Arkham Asylum to acclaimed runs on Animal Man and Doom Patrol, as well as his subversive creator-owned titles such as The Invisibles, Seaguy, and WE3. Grant has written best-selling runs on JLA, Seven Soldiers of Victory, and New X-Men and helped to reinvent the DC Universe in The Multiversity, All-Star Superman, 52, Batman, Batman and Robin, and Batman Incorporated. More recently Grant has had his creator-owned series Happy! turned into a TV series on the Syfy network. He also made his return to monthly comics in 2018 with The Green Lantern.