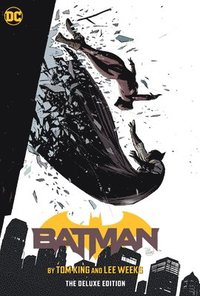 av Tom King
Inbunden Engelska, 2020-11-17
259
Köp
Spara som favorit
Superstar comic book writer Tom King teams with one of the industry s most respected artists, Lee Weeks, to take on pop culture s greatest hero, Batman! This collection includes Cold Days, as Bruce Wayne gets jury duty for a court case involving Mr. Freeze! Will the evidence cause Batman to rethink his methods? In Knightmares, Batman chases a new foe who outsmarts him at every turn is it someone more familiar to the Dark Knight than even he suspects? And in the Eisner Award-nominated Batman/Elmer Fudd Special, Batman ends up in the Looney Tunes character s crosshairs, in a story you never expected!
Visa hela texten

Tom King is a comic book writer and novelist, best known for his acclaimed work at DC including Batman, the multiple Eisner Award-winning Mister Miracle, Grayson and The Omega Men; plus Marvel's The Vision. He often draws on his experience as an ex-CIA agent and during the recent conflicts in the Middle East in his writing, especially apparent in Grayson (alongside co-writer Tim Seeley), Omega Men and The Sheriff of Babylon, published under DC's Vertigo imprint.