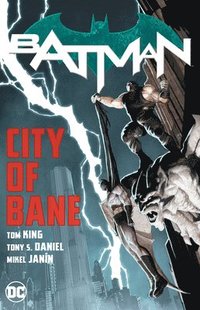 av Tom King
Häftad Engelska, 2020-12-15
289
Bevaka
Spara som favorit
Tillfälligt slut – klicka "Bevaka" för att få ett mejl så fort boken går att köpa igen.
The Caped Crusader had a sinking suspicion there was someone lurking in the shadows plotting against him. There has been an unseen hand orchestrating these events. And while the true villain has yet to reveal himself, his minions are starting to step forward and break the Bat down once and for all beginning with Thomas Wayne, the Batman from the Flashpoint universe! Just when the bad guys thought they had it made with Bane in control, Batman is back in Gotham and ready to remind them what justice feels like and how it hurts when it hits you in the face. But is the Dark Knight Detective ready to take on the foe who broke him worse than any other that came before? Tread lightly, Batman, because not only do the lives of your son and trusted friends hang in the balance, but your entire home could collapse. Batman and his allies have a choice: let Bane stay in power and guarantee the city s survival, or risk everything to break free! Collects Batman issues #75-85.
Visa hela texten

Tom King is a comic book writer and novelist, best known for his work at DC Comics including Batman, Mister Miracle and The Omega Men. He won Eisner awards for best writer for his work on Mister Miracle and Marvel's Vision. He often relies on his experience as an ex-CIA agent and experiences during the recent conflicts in the Middle East in his writing. King joined the CIA counterterrorism unit after September 11 where he stayed for seven years before to writing his first novel A Once Crowded Sky.