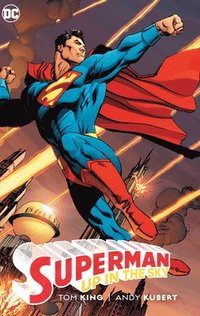 Superman: Up in the Sky

av Tom King, Andy Kubert
Häftad Engelska, 2021-04-20
159
Köp
Spara som favorit
Kan levereras innan julafton!
Superman takes flight in this exciting new adventure! A young girl named Alice is kidnapped by aliens, and Superman is determined to find her somewhere up in the sky. The Man of Steel goes to incredible lengths in search of Alice, taking on plenty of challenges along the way including boxing against Mighto, preventing a space missile attack, and fighting alongside Sgt. Rock during World War II. While he is away, he worries about the people of Metropolis as well as the love of his life, Lois Lane. While on the quest to save Alice, Superman can t help but grapple with an important philosophical question is he doing the right thing by saving one person instead of focusing on saving thousands? From acclaimed writer Tom King (Batman, The Omega Men) and artist Andy Kubert (Dark Knight III: The Master Race, Flashpoint), Superman: Up in the Sky collects issues #1-6 of this thrilling series.
Visa hela texten

Tom King is a comic book writer and novelist, best known for his work at DC Comics including Batman, Grayson and The Omega Men. He won Eisner Awards for best writer for his work on Mister Miracle and Marvel's Vision. He often relies on his experience as an ex-CIA agent and experiences during the recent conflicts in the Middle East in his writing. King joined the CIA counterterrorism unit after September 11, where he stayed for seven years before writing his first novel, A Once Crowded Sky.