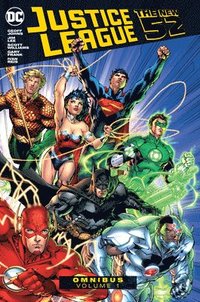 av Geoff Johns, Jim Lee
Inbunden Engelska, 2021-06-22
889
Köp
Spara som favorit
In a world where inexperienced superheroes operate under a cloud of suspicion from the public, loner vigilante Batman has stumbled upon a dark evil that threatens to destroy the earth as we know it. Now, faced with a threat far beyond anything he can handle on his own, the Dark Knight must trust an alien, a Scarlet Speedster, an accidental teenage hero, a space cop, an Amazon Princess and an undersea monarch. Will Superman, the Flash, Cyborg, Green Lantern, Wonder Woman and Aquaman be able to put aside their differences and come together to save the world? Or will they destroy each other first? Collects Justice League #0-22; Aquaman #14-16; Justice League Dark #22-23; DC Comics - The New 52 FCBD Special Edition #1; Justice League of America #6-7; Trinity of Sin: The Phantom Stranger #11; Constantine #5; Trinity of Sin: Pandora #1-3.
Visa hela texten

Geoff Johns is an award-winning writer and one of the most popular contemporary comic book writers today. Johns is the author of The New York Times bestselling graphic novels AQUAMAN: THE TRENCH, BLACKEST NIGHT, GREEN LANTERN: THE SINESTRO CORPS WAR, JUSTICE LEAGUE: ORIGIN, SUPERMAN: BRAINIAC and BATMAN: EARTH ONE which hit #1 on the bestseller list. He is also known for transforming Green Lantern into one of the most critically and commercially successful franchises in comics. Johns was born in Detroit and studied media arts, screenwriting and film at Michigan State University. After moving to Los Angeles, he became an assistant to Richard Donner, director of Superman: The Movie. He and his mentor Donner later co-wrote SUPERMAN: LAST SON featuring the return of General Zod. Johns has written for various other media, including episodes of Smallville, Arrow and Adult Swim's Robot Chicken, for which he was nominated along with his co-writers for an Emmy. He resides in Los Angeles, California. Jim Lee is a renowned comic book artist and the publisher of DC Entertainment. Lee was also the artist for many of DC Comics' best-selling comic books and graphic novels, including All-Star Batman and Robin, The Boy Wonder, Batman: Hush and Superman: For Tomorrow. He also served as the executive creative director for the DC Universe Online (DCUO) massively multiplayer action game from Sony Online Entertainment (SOE). With writer Geoff Johns, Lee drew the flagship title of DC Comics --The New 52, Justice League.