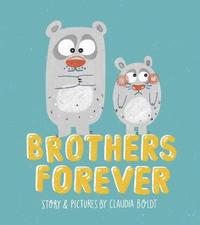 av Claudia Boldt
Häftad Engelska, 2018-05-03
99
Köp
Spara som favorit
Skickas inom 7-10 vardagar.
Fri frakt inom Sverige över 159 kr för privatpersoner.
Lee and Barnaby are brothers. Some days they get on, some days they don't. But things change when Barnaby starts school and tensions run high. Will they remember that brothers are forever after all? This touching and honest story is told with Claudia Boldt's trademark style and wit, and will be instantly recognisable to anyone who has a brother or sister.
Visa hela texten

Claudia's work has been exhibited in London, Zurich and Berlin and has been selected to show at the illustrators' exhibition in Bologna. In 2011 she was awarded the Booktrust Best New Illustrators Award in the UK. She attended Glasgow's School of Art and then Kingston University, graduating with her Masters in Illustration in 2007 - the same year she founded Cloud Cuckoo Studio with fellow illustrator Katharina Koall in London's East End.