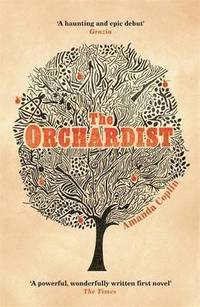 av Amanda Coplin
Häftad Engelska, 2014-03-06
129
Köp
Spara som favorit
'A haunting and epic debut with shades of Steinbeck' [GRAZIA] about a makeshift family in the untamed American West. Includes Reading Group Notes. At the turn of the 20th century, in a remote stretch of Northwest America, a solitary orchardist, Talmadge, tends to apples and apricots as if they were his children. One day, two teenage girls steal his fruit at the market. Feral, scared and very pregnant, they follow Talmadge to his land and form an unlikely attachment to his gentle way of life. But their fragile peace is shattered when armed men arrive in the orchard. In the tragedy that unfolds, Talmadge must fight to save the lives of those he has learned to love while confronting the ghosts of his own troubled past. THE ORCHARDIST is an astonishing and unforgettable epic about a man who disrupts the lonely harmony of his life when he opens his heart and lets the world in.
Visa hela texten

This is a powerful, wonderfully written first novel. -- Kate Saunders * THE TIMES * Coplin's rendering of place invites comparison with William Faulkner's recreations of Mississippi. -- Lucian Robinson * TIMES LITERARY SUPPLEMENT * Amanda Coplin follows the path of American epic naturalist writers such as John Steinbeck in her beautifully written debut, in the way she tracks the movement of communities and examines the relationship between people and their environment...From brooding long over deceptively simple ingredients, Coplin has created a psychologically complex novel of considerable emotional power. -- Rachel Hore * INDEPENDENT ON SUNDAY * The Orchardist is a powerful, finely crafted novel. -- Suzi Feay * FINANCIAL TIMES * Amanda Coplin's The Orchardist is a haunting and epic debut with shades of Steinbeck. * GRAZIA * An utterly enthralling, heart-breaking story. * EASY LIVING * I was still thinking about this moving tale, set in early 20th century America, days after reading it. A reclusive man lives alone until two pregnant, feral girls ask for help. As he lets them in, stories of love, loss and revenge unfold. If you like emotional, historical fiction, you'll love this. * ESSENTIALS * A powerful moving novel. * WOMAN & HOME * This is a story about love, often intensely moving but far bigger than your common or garden tear-jerker and gorgeously written...There are echoes of Silas Marner, as the lonely man and the wild girls become an unorthodox family, but the outside world can't be kept out, as strangers on a mission bring violence into this Eden. The writing is vivid and poetic, with a strong sense of emotional wisdom. -- Kate Saunders * SAGA * A beautifully evocative story * MARIE CLAIRE * The prose is rich and slow, the book takes its time to immerse us in the lives of the area's inhabitants. It's an immersive experience, about how over years we shape our lives and the lives of those we love and how every action has consequences, good and bad. * WE LOVE THIS BOOK * This is a stylishly written debut novel of intense imagery and fine storytelling. * CHOICE * Powerful, intense and deeply tender, The Orchardist by Amanda Coplin is set in the American North West at the start of the last century...An original and stunning story by a remarkable new writer. * RED ONLINE * The first big debut of 2013 - and it's a corker. Set in a remote part of north-western America at the turn of the 20th century, reclusive William Talmadge has tended his beloved orchard for years. His peace is disturbed by two young girls, pregnant and desperate, needing help, and his decision to offer them shelter on the farm will prove a brave one when armed men arrive to take the girls back. What unfolds is a compelling story of survival in harsh times - don't miss * THE BOOKSELLER * There is a strong thread of melancholy running through the novel but it is the great sweep of the landscape that lingers and Talmadge, patiently tending his treasured trees as he watches the world change around him. * BOOKOXYGEN * "The Orchardist" is engaging and enthralling. The reader wants to turn each page quickly as the story develops, and wants at the same time to dwell on the lyrical moments of sunshine, soil and love * SEATTLE TIMES (USA) * Amanda Coplin's somber, majestic debut arrives like an urgent missive from another century. Steeped in the timeless rhythms of agriculture, her story unfolds in spare language as her characters thrash against an existential sense of meaninglessness. Confronted by the stark reminder of mortality, one responds, "It didn't matter" - a weary comment any of them might have made. Coplin's saga of a makeshift family unmoored by loss should be depressing, but, instead, her achingly beautiful prose inspires exhilaration. You can only be thrilled by a 31-year-old writer with this depth of understanding * WASHINGTON POST (USA) * Another debut generating buzz is Amanda Coplin

A native of Washington State, Amanda Coplin has been a Fellow at The Fine Arts Work Centre in Provincetown, Massachusetts, as well as Ledig House International Writers' Residency Program in Ghent, New York. She lives in Minneapolis, Minnesota. http://www.facebook.com/AmandaCoplinWriter