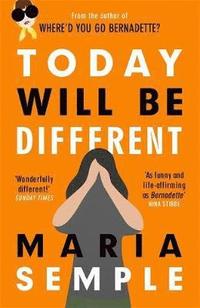 Today Will Be Different

From the bestselling author of Where'd You Go, Bernadette

av Maria Semple
Häftad Engelska, 2017-06-29
129
Köp
Spara som favorit
Finns även som
Visa alla 1 format & utgåvor
Eleanor Flood knows she's a mess. But today will be different. Today she will shower and put on real clothes. She will attend her yoga class after dropping her son, Timby, off at school. She'll see an old friend for lunch. She won't swear. She will initiate sex with her husband, Joe. But before she can put her modest plan into action - life happens. For today is the day Timby has decided to pretend to be ill to weasel his way into his mother's company. It's also the day surgeon Joe has chosen to tell his receptionist - but not Eleanor - that he's on vacation. And just when it seems that things can't go more awry, a former colleague produces a relic from the past - a graphic memoir with pages telling of family secrets long buried and a sister to whom Eleanor never speaks.
Visa hela texten

The joy, as before, is in the narrative voice... Brilliant set-pieces include a scene of existential despair in CostCo, a flashback to a hideous society wedding in the deep south, and Dr Joe's epiphany during a Seattle Seahawks game.. Semple reaffirms her gift for creating memorable, monstrous characters * THE GUARDIAN * This whip-smart, bleakly humorous study of how we live now is full of finely drawn characters and deserves to widen her fanbase. * SUNDAY TIMES * It's funny and silly but also poignant and more than a little reminiscent of Semple's bestselling Where'd You Go, Bernadette * MAIL ON SUNDAY * There are some good lines and more than a few laughs, plus occasional pungent observations on life * DAILY MAIL * With its sparky gags and quirky cast of characters, never has a meltdown been so entertaining * GLAMOUR * One to Watch: Where'd You Go, Bernadette established Maria Semple as a brilliant comic writer. Today Will Be Different, about a middle-aged mum who is desperately trying to keep control of her life despite having one of those days, is just as smart, funny and original. * GOOD HOUSEKEEPING * sees Semple once again writing about a difficult woman with gleeful empathy and humour that can turn on a knife edge to heartbreak * RED * Whipsmart, dazzling, darkly comic and deeply touching. I loved it! -- Marian Keyes I adore it. Every bit as smart - and smart-arsed - as BERNADETTE . . . this is wonderful -- Sam Baker, author of THE WOMAN WHO RAN and co-founder of THE POOL So unique, so smart, so funny, so beautifully humane, so utterly of our times, it's astonishing -- Gillian Flynn, author of GONE GIRL I love Maria Semple! TODAY WILL BE DIFFERENT is just as funny, poignant, and life-affirming as BERNADETTE -- Nina Stibbe, author of LOVE, NINA and MAN AT THE HELM I had the uncanny feeling, while reading TODAY WILL BE DIFFERENT, that Maria Semple had somehow snuck into my house when I was asleep, took an x-ray image of my heart, then painted it by hand in neon colors. This book is searingly honest and hilarious and dark and neurotic. It is dizzying. Best of all, it is delicious -- Lauren Groff, author of FATES AND FURIES Clever, funny and silly * PSYCHOLOGIES * This waspishness selfishness is a clever mask, but Semple has a knack of teasing out the warmth behind it. * FINANCIAL TIMES * an entertaining book to while away a few hours. * SUNDAY EXPRESS * her narrative oozes stylistic originality * i NEWSPAPER * Captivating, right up to the final twist. * GRAZIA * this witty novel is a life-affirming read. * CLOSER * Semple has mastered the intersection of sad and nuts like no one else.... Like a cross between Jonathan Franzen's The Corrections, the best episides of Bob's Burgers, and the private journal of the smartest, most irritable woman you know, Today Will Be Different is a reckless and scattershot work of genius -- Heather Havrilesky * Bookforum * Another tour de force... The success of this poetic, seriously funny and brainy dream of a novel - 'Mrs. Dalloway Takes Laughing Gas', perhaps - has to do with Maria Semple's range of riffs and preoccupations. All kinds of details, painful and perverse and deeply droll, cling to her heroine and are appraised and examined and skewered and simply wondered at. If that's considered a trick, readers of Semple's novel will be overjoyed to fall for it -- Meg Wolitzer * New York Times Book Review * Writing a comedy novel that manages to connect emotionally is no easy task, but Semple knocks it out of the park. Today Will Be Different is hilarious, moving and written perfectly, and it makes a good case for Semple as one of America's best living comic novelists -- Michael Schaub * NPR.org * Readers who devoured Where'd You Go, Bernadette will love Eleanor [Flood]'s wry voice and dark humor -- Kim Hubbard * People * Loopy, deeply and darkly funny, and brave... Semple is a master of the social skewer, boldly impolite and impolitic... Eleanor is as sharp and Semple-esque as they come

Maria Semple spent fifteen years in Los Angeles as a television writer, working on hit shows including ELLEN, SATURDAY NIGHT LIVE, MAD ABOUT YOU and ARRESTED DEVELOPMENT. Her second novel, WHERE'D YOU GO, BERNADETTE, was an international bestseller and was shortlisted for the 2013 Women's Prize for Fiction and won the 2013 Melissa Nathan Award. Maria lives in Seattle. www.mariasemple.com