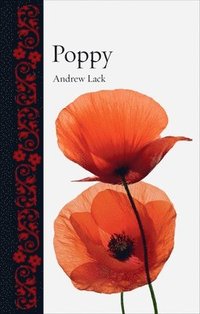 av Andrew Lack
Inbunden Engelska, 2016-11-01
179
Köp
Spara som favorit
Skickas inom 7-10 vardagar.
Fri frakt inom Sverige för privatpersoner.
Kan levereras innan jul!
Finns även som
Visa alla 1 format & utgåvor
The poppy is the classic cornfield plant. Throughout history it has been one of the most successful of all agricultural weeds. Its brilliant colour has made it one of our best-known plants - it is beloved of artists and poets, though often hated by farmers. But its origins are obscure; it seems entirely confined to agricultural and marginal land, wherever it is found. Where was it before the inception of agriculture? And how is it that it is almost unique in its colour among the flowers of northern Europe?In Poppy Andrew Lack explores all aspects of one of our most familiar but declining flowers, combining history and biology with symbolic associations and connections with the arts. He describes why the poppy is so intimately associated with war and remembrance, and tells remarkable stories about the different varieties: the opium poppy, one of the oldest of narcotics, has had a profound influence on human history; the term 'tall poppy syndrome' is now used to describe envy of the success of a peer; and in many countries the poppy has come to symbolize weddings or death. Beautifully illustrated throughout, Poppy will appeal to the many admirers of this most colourful and striking plant.
Visa hela texten

"The illustrations are spaced perfectly with the text so that as a page is turned, the appropriate image appears. The illustrations never appear too early or too late. Amazing! . . . The index is modest and shows twenty-seven varieties of poppies--a tribute to the author's thoroughness. . . . Along with the editor's care in layout, the paper stock choice, and the portability of the book, all validate the neo-Luddites' claim that physical books still matter."-- "Choice" "Gorgeously illustrated. . . . Poppy ranges widely in both period and subject, from Assyrian carvings of poppy capsules and Claude Monet's impressionist paintings of poppy fields to the use of poppy seed in modern cooking, and the grim ironies of the twenty-first-century Afghan opium trade. But the book is probably at its strongest with the science of poppies, particularly their botany. How fascinating to know that as the corn poppy spread from its presumed origin in the eastern Mediterranean northwards into Europe, it changed both its method of pollination from beetles to bees and its color: and that these two facts are interrelated by natural selection."-- "Lancet"

Andrew Lack is a lecturer in biology at Oxford Brookes University. His previous books include Redbreast: The Robin in Life and Literature (2008), Instant Notes in Plant Biology, with David Evans (2005), and The Natural History of Pollination, with Michael Proctor and Peter Yeo (1996).