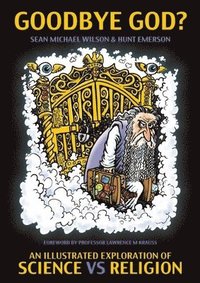 An Illustrated Exploration of Science vs. Religion

av Sean Michael Wilson
Häftad Engelska, 2015-04-30
129
Köp
Spara som favorit
Skickas inom 5-8 vardagar.
Fri frakt inom Sverige över 159 kr för privatpersoner.
A graphic novel that explores the evolution vs creation debate and calls for an end to the teaching of creationism in schools. It pans out to consider the negative impacts of religion, and with the active support of the American Humanist Association, demonstrates how a concern for humanism, science and reasoned logical thinking is crucial for the development of society.
Visa hela texten

"We need books like Goodbye God? to help expose both religious and scientific nonsense that can get in the way of sound thinking and to help produce a healthier and happier world with public policies that properly address the challenges of the 21st century" -Professor Lawrence M Krauss, author of A Universe from Nothing; "A unique and innovative primer on Humanism, the importance of science and the evolution vs creationism debate. This illustrated guide deserves to reach a wide audience" -Richy Thompson, British Humanist Association; "A superbly even-handed and open-minded graphic narrative discourse... gripping and genuinely revelatory reading" -Comicsreview.co.uk; "The graphic novel format is ideal for the confused adolescent or adult averse to tedious "learned" polemic, with the inimitable Hunt Emerson's tableaux and strips complementing the narrative with zest and a measured comic sense" -Morning Star.

Sean Michael Wilson is a comic book writer from Scotland, who now lives in Japan. He has had more than a dozen books published with a variety of US, UK and Japanese publishers. His book with War on Want, Iraq :Operation Corporate Takeover was widely reported on by a variety of mainstream agencies. He is also the editor of the critically acclaimed collection AX:alternative manga (one of Publishers Weekly's Best ten books of 2010). He is co-author of the recent visual history of protest Fight the Power. Hunt Emerson is a cartoonist living and working in Birmingham, England. He was closely involved with the Birmingham Arts Lab of the mid-to-late 1970s, and with the British underground comics scene of the 1970s and 1980s. The Emerson graphic novels Lady Chatterley's Lover, The Rime of the Ancient Mariner, Casanova's Last Standand other adaptations of classic novels and tales have been successfully sold in numerous countries, and translated into several different languages. He is co-artist of the recent visual history of protest Fight the Power.