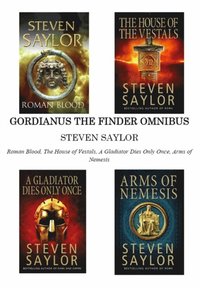 av Steven Saylor
(1 röst)  |  Läs 1 recension
E-bok (EPUB - DRM), Engelska, 2012-05-17
82
Den här boken kan endast laddas ned av privatpersoner.
Ladda ned
Spara som favorit
Laddas ned direkt
Läs i vår app för iPhone, iPad och Android
ROMAN BLOODA thrilling puzzle from the ancient world with real historical characters and based on a case in Cicero's Orations - Roman Blood is a perfect blend of mystery and history by a brilliant storyteller. On an unseasonably warm spring morning in 80BC, Gordianus the Finder is summoned to the house of Cicero, a young advocate and orator preparing his first important case. His client is Umbrian landowner, Sextus Roscius, accused of the unforgivable: the murder of his own father. Gordianus agrees to investigate the crime - in a society fire with deceit, betrayl and conspiracy, where neither citizen nor slave can be trusted to speak the truth. But even Gordianus is not prepared for the spectacularly dangerous fireworks that attend the resolution of this ugly, delicate case...HOUSE OF THE VESTALSWonderfully entertaining mystery stories set in the world of the acclaimed ROMA SUB ROSA series. It is the Rome of the Late Republic, and Gordianus the Finder has a knack for finding trouble - and dead bodies. Known to many as the one man in the ancient world who can both keep a secret and uncover one, Gordianus lays bare some of his most intriguing adventures in this new volume in Steven Saylor's highly acclaimed mystery series. In 'Little Caesar and the Pirates', Gordianus must act as a go-between for kidnappers, but he begins to wonder who is really being held hostage; in 'The Alexandrian Cat', a mischievous girl and a tell-tale sneeze reveal an ingenious plot of murder and thievery; and in 'The House of the Vestals', blackmail goes horribly wrong and there is no one to take the blame. The result is an engrossing collection of finely wrought mystery tales with all the suspense and craft that are the trademark of Saylor's work.A GLADIATOR DIES ONLY ONCEGordianus the Finder, famed detective of Ancient Rome, returns in a riveting of stories. Nine tales of murder and intrigue take him from the seamy streets of Rome to elegant villas on the Bay of Naples, from the spectacular backdrop of a chariot race to a domestic dispute with his Egyptian concubine Bethesda.In the title story a beautiful Nubian actress begs Gordianus to solve an impossible problem: how can she have just seen her beloved brother in the market place when she had previously watched him die a gruesome death as a gladiator?ARMS OF NEMESISSouth of Rome on the Gulf of Puteoli stands the splendid villa of Marcus Crassus, Rome's wealthiest citizen. When the estate overseer is murdered, Crasus concludes that the deed was done by two missing slaves, who have probably run off to join the Spartacus Slave Revolt. Unless they are found within five days, Crassus vows to massacre his remaining ninety-nine slaves.To Gordianus the Finder falls the fateful task of resolving this riddle from Hades. In a house filled with secrets, the truth is slow to emerge and Gordianus realizes that the labyrinthine path he has chosen just may lead to his own destruction.
Visa hela texten