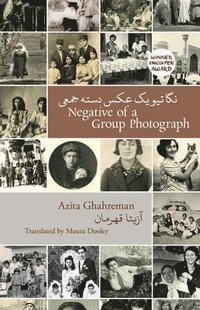 Negative of a Group Photograph

av Azita Ghahreman
Häftad Engelska, 2018-10-08
149
Bevaka
Spara som favorit
Tillfälligt slut – klicka "Bevaka" för att få ett mejl så fort boken går att köpa igen.
Finns även som
Visa alla 1 format & utgåvor
Negative of a Group Photograph brings together three decades of poems by the leading Iranian poet Azita Ghahreman. Born in Mashhad in 1962 and based in Sweden since 2006, Ghahreman is the author of five highly acclaimed collections. Her poems are lyrical and intimate, addressing themes of loss, exile and female desire, as well as the changing face of her country. Negative of a Group Photograph runs the gamut of Ghahreman's experience: from her childhood in the Khorasan region of south-eastern Iran to her exile to Sweden, from Iran's book-burning years and the war in Iraq to her unexpected encounters with love. The poems in this illuminating collection are brought to life in English by the poet Maura Dooley, working in collaboration with Elhum Shakerifar. Farsi-English dual language edition co-published with the Poetry Translation Centre.
Visa hela texten

These poems are a wonderful mixture of the bodily, the earthy and the transcendent, the metaphysical; they have lyricism and a sense of elegy and a wonderful sense of defiance. -- Boyd Tonkin * Judge, Warwick Prize for Women in Translation *

Azita Ghahreman is the author of five collections of poetry, Eve's Songs (1991), Sculptures of Autumn (1995), Forgetfulness is a Simple Ritual (2002), The Suburb of Crows (2008) and Under Hypnosis in Dr Caligari's Cabinet (2012). In 2013 she was a recipient of Swedish PEN's Prince Wilhelm Award. Russian and Ukrainian translations of her poems were awarded the Udmurtia Russian Academy's Ludvig Nobel Prize in 2014. She was born in Mashhad in 1962 and has lived and worked in Sweden since 2006. Her pamphlet, Poems, was published by the Poetry Translation Centre in 2012. Negative of a Group Photograph, a dual-language Farsi-English edition (Farsi title: ) translated by Maura Dooley with Elhum Shakerifar, was published by Bloodaxe Books with the Poetry Translation Centre in 2018. Negative of a Group Photograph was shortlisted for the Warwick Prize for Women in Translation 2019.