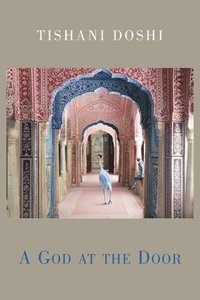 A God at the Door

av Tishani Doshi
Häftad Engelska, 2021-04-22
141
Köp
Spara som favorit
Finns även som
Visa alla 1 format & utgåvor
An exquisite collection from a poet at the peak of her powers, Tishani Doshi's Forward-shortlisted A God at the Door spans time and space, drawing on the extraordinary minutiae of nature and humanity to elevate the marginalised. Extending the territory of her zeitgeist collection Girls Are Coming Out of the Woods, these new poems traverse history, from the cosmic to the quotidian. There is a playful spikiness to be found in poems like 'Why the Brazilian Butt Lift Won't Save Us', while others, such as 'I Found a Village and in it Were All Our Missing Women', are fed by rage. As the collection unfolds, there are gem-like poems such as 'I Carry My Uterus in a Small Suitcase' which sparkles on the page with impeccable precision. Later, there are the sharp shocks delivered by two mirrored poems set side by side, 'Microeconomics' and 'Macroeconomics'. Tishani Doshi's poetry bestows power on the powerless, deploys beauty to heal trauma, and enables the voices of the oppressed to be heard with piercing clarity. From flightless birds and witches, to black holes and Marilyn Monroe, A God at the Door illuminates with lines and images that surprise, inflame and dazzle.
Visa hela texten

May we always have the music and elegant fury of Tishani Doshi's poetry. -- Fatima Bhutto I love the opulent poetry of Tishani Doshi. -- Chimamanda Ngozi Adichie * New York Times * This intelligent, elegant, unflinching collection. It's very much a collection for this moment in history, but one that will endure long past it. -- Kamila Shamsie * The Guardian (Best Summer Reads), on Girls Are Coming Out of the Woods * The title poem is a haunting vision of retribution... Doshi's poem is exceptionally timely, although it was written before the rise of the #MeToo movement. It's impossible not to cheer the boldness and liberation enacted by much of this book, and to be stirred by its bravery. To paraphrase one interviewer, Doshi is writing the anthems of her generation. -- Sandeep Parmar * The Guardian, on Girls Are Coming Out of the Woods *

Tishani Doshi is an award-winning poet and dancer of Welsh-Gujarati descent. She was born in Madras, India, in 1975. She received her masters in writing from the Johns Hopkins University in America and worked in London in advertising before returning to India in 2001 to work with the choreographer Chandralekha, with whom she performed on many international stages. An avid traveller, she has been trekking in the Ethiopian Bale Mountains, visited Antarctica with a group of high-school students, and documented the largest transvestite gathering in Koovakam. She has written about her travels in newspapers such as the Guardian, International Herald Tribune, The Hindu and the Financial Times. She won an Eric Gregory Award for her poetry in 2001. In 2006, she won the All-India Poetry Competition, and her debut collection, Countries of the Body (Aark Arts), won the Forward Prize for Best First Collection. Her first novel, The Pleasure Seekers (Bloomsbury, 2010), was longlisted for the Orange Prize and shortlisted for the Hindu Fiction Award, and has been translated into several languages. Her second poetry collection, Everything Begins Elsewhere, was published by Bloodaxe Books in 2012. Fountainville: new stories from the Mabinogion was published by Seren in 2013. Her third collection, Girls Are Coming Out of the Woods (Bloodaxe Books, 2018), is a Poetry Book Society Recommendation and was shortlisted for the Ted Hughes Award for New Work in Poetry 2018. Her second novel, Small Days and Nights (Bloomsbury, 2019), was shortlisted for the RSL Ondaatje Prize. Her fourth collection, A God at the Door (Bloodaxe Books, 2021), is shortlisted for the Forward Prize for Best Collection. Tishani Doshi currently lives on a beach between two fishing villages in Tamil Nadu with her husband and three dogs, and sometimes moonlights as a dancer. For more information, see her website www.tishanidoshi.com

11 Mandala 12 Pilgrimage 13 Creation Abecedarian 14 The Stormtroopers of My Country 15 My Loneliness Is Not the Same as Your Loneliness 18 A Blue Mormon Finds Herself Among Common Emigrants 20 Why the Brazilian Butt Lift Won't Save Us 22 Every Unbearable Thing 25 Advice for Pliny the Elder, Big Daddy of Mansplainers 26 Roots 28 In a Dream I Give Birth to a Sumo Wrestler 30 Instructions on Surviving Genocide 37 The Comeback of Speedos 38 Face Exercises for Marionette Lines 39 I Found a Village and in it Were All Our Missing Women 41 Contagion 42 Tree of Life 44 Homage to the Square 46 I Don't Want to be Remembered by My Last Instagram Post 48 Everyone Has a Wilting Point 50 Tigress Hugs Manchurian Fir 51 Poems Lull us into Safety 52 After a Shooting at a Maternity Clinic in Kabul 54 They Killed Cows. I Killed Them. 59 Cell 60 Self 61 Collective 62 Nation 63 Species 64 Cosmos 67 The Coronapocalypse Will Be Televised 69 Variations on Hippo 72 A Dress is Like a Field 74 Postcard to My Mother-in-Law who at 16 is Chasing Brigitte Bardot in St Tropez 75 Together 76 Many Good & Wonderful Things 78 I Carry My Uterus in a Small Suitcase 79 Bacterium 80 A Possible Explanation as to Why We Mutilate Women & Trees, which Tries to End on a Note of Hope 82 What Mr Frog Running Away from Marilyn Monroe Taught Me About #MeToo 84 Tiger Woman 85 We Will Not Kill You. We'll Just Shoot You in the Vagina 89 Microeconomics 91 Macroeconomics 92 This May Reach You Either as a Bird or Flower 93 Petard 94 Rotten Grief 96 October Fugue 97 Do Not Go Out in the Storm 100 Listening to Abida Parveen on Loop I Understand Why I Miss Home and Why It Must Be So 102 End-of-Year Epiphany in the Holiday Inn 104 It Has Taken Many Years to See My Body 107 Hope Is the Thing 109 Survival 113 Notes 118 Acknowledgements