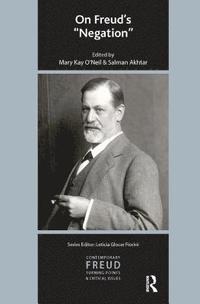 av Salman Akhtar, Mary Kay O'Neil
Häftad Engelska, 2011-08-03
439
Köp
Spara som favorit
Skickas inom 10-15 vardagar.
Fri frakt inom Sverige för privatpersoner.
Finns även som
Visa alla 3 format & utgåvor
Ever since Freud proposed that certain ideas can be permitted to become conscious only in their inverted and negative forms, interest has grown into the entire realm of the presence of absence, so to speak. Or, perhaps, it is better to term such mental contents as the presence in the form of absence. These two ways of conceptualizing Freud's negation have led to a panoply of ideas that include negative hallucination, psychic holes, negative narcissism, selfishly motivated erasure of the Other, and the so-called "work of the negative". This volume elucidates these concepts and refines the distinction between Freud's negation and subsequently described mental mechanisms of denial, repudiation, isolation, and undoing. The book also provides contemporary perspectives on the developmental underpinnings of negation and the technical usefulness of the concept, including its implicit role in negative therapeutic reactions. A thought-provoking and conceptually illuminating volume.
Visa hela texten

Contributors: Salman Akhtar, Cesar Botella, Sara Botella, Jorge Canestri, Joachim F. Danckwardt, Antonino Ferro, Andre Green, Ilany Kogan, Bonnie E. Litowitz, Jorge Luis Maldonado, Mary Kay O'Neil, Brian M. Robertson'This unique collection presents us with a variety of theoretical and clinical perspectives regarding Freud's 1925 paper on negation, articulated by well-known internationally based authors. Is negation just repression that didn't quite make it? How does negative therapeutic reaction relate to negation? What about negation and creativity? The writing - including that by the editors - affirms, and then builds on, Freud's original thinking, thereby providing for the reader a clear intellectual grasp of the concept, as well as lowering the countertransferential hurdles we often encounter with analysands who seem to persist in saying "No".'- Sarah Usher, PhD, past President, Toronto Psychoanalytic Society'Freud's paper "Negation" was published in 1925 amid the creative ferment produced by his introduction of a new paradigm for psychoanalysis, but because of its brevity and position among Freud's major writings, it has often been overlooked or underappreciated. Now, however, thanks to this volume of essays by a distinguished international group of leading contemporary psychoanalytic scholars, it should assume its rightful place, not only as a contribution to analytic technique, but as an important preliminary step in Freud's conceptualization of the creation and maintenance of reality sense and a foundational essay in the development of his theory of thinking.'- Howard Levine, MD, training and supervising analyst, Psychoanalytic Institute of New England-East