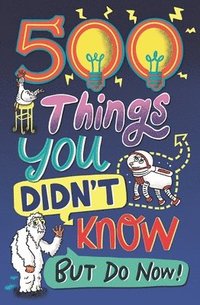 av Samantha Barnes, Dominique Enright, Guy MacDonald, Matthew Morgan
Häftad Engelska, 2020-10-01
128
Köp
Spara som favorit
Skickas inom 5-8 vardagar.
Gratis frakt inom Sverige över 159 kr för privatpersoner.
Want to know how to speak like a spy, make a balloon sword or hypnotize a chicken? This is the book for you. From the weird and wonderful to the hilarious and record breaking, it's packed with over 500 fun facts and intriguing things that every kid should know.
Visa hela texten

Dominique Enright (Author) Dominique Enright is a freelance writer and editor. Her previous works for Michael O'Mara Books include The Wicked Wit of Winston Churchill and The Wicked Wit of Jane Austen, and she is also the compiler and editor of selections from the verse of Burns, Keats, Kipling and Wordsworth. She lives in London with her husband, son and two daughters. Guy MacDonald (Author) Guy Macdonald was born in 1972. He grew up in a rambling old house surrounded by huge yew trees that he became very good at climbing. Across the fields was a river where he fished with string from a bamboo cane and made campfires. His greatest achievements of all time are: ripping a telephone directory in half, holding his breath for nearly two minutes underwater and whistling through a blade of grass. He has also co-written a series of children's fiction books called An Awfully Beastly Business about a werewolf boy who climbs trees, makes campfires and, given the chance, could almost certainly fold a single piece of paper at least seven times.