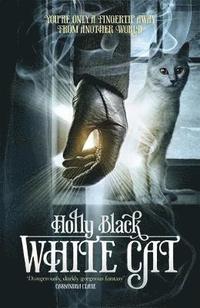 av Holly Black
Häftad Engelska, 2012-02-01
119
Bevaka
Spara som favorit
Tillfälligt slut – klicka "Bevaka" för att få ett mejl så fort boken går att köpa igen.
Finns även som
Visa alla 5 format & utgåvor
CASSEL IS CURSED Cursed by a memory. He murdered the girl he loved - and he doesn't remember why. In a world where magic is illegal and his family is branded criminal, Cassel doesn't fit in. He has no magical talent - just a gift for getting into trouble. Boarding school offers an escape, but then the dreams start. Dreams that drive him home to unravel his past. Dreams that force him to confront who he really is and what he's really done. Cassel is about to discover that his family hides an incredible secret - one that will transform his life for ever. A sensational new novel from the bestselling author of The Spiderwick Chronicles.
Visa hela texten

Holly Black is the co-creator of THE SPIDERWICK CHRONICLES. A NEW YORK TIMES No. 1 bestselling phenomenon, the series has been described as 'vintage Victorian fantasy' and has been made into a hugely sucessful film. The books have been translated into 32 languages. Holly Black lives with her husband in Massachusetts. Visit Holly's website at http://www.blackholly.com, read her blog at http://blackholly.livejournal.com, follow her on Twitter at https://twitter.com/hollyblack and Pinterest at http://pinterest.com/hollyblack and like her on Facebook at https://www.facebook.com/HollyBlackFan.