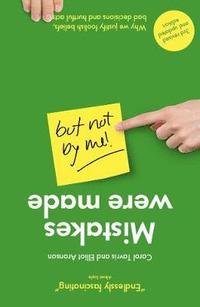 Mistakes Were Made (but Not by Me)

Why We Justify Foolish Beliefs, Bad Decisions and Hurtful Acts

av Carol Tavris, Elliot Aronson
Häftad Engelska, 2020-08-04
191
Köp
Spara som favorit
Why is it so hard to say "I made a mistake"-and really believe it? When we make mistakes, cling to outdated attitudes, or mistreat other people, we must calm the cognitive dissonance that jars our feelings of self-worth. And so, unconsciously, we create fictions that absolve us of responsibility, restoring our belief that we are smart, moral, and right-a belief that often keeps us on a course that is dumb, immoral, and wrong. Backed by years of research, Mistakes Were Made (But Not by Me) offers a fascinating explanation of self-justification-how it works, the damage it can cause, and how we can overcome it. This updated edition features new examples and concludes with an extended discussion of how we can live with dissonance, learn from it, and perhaps, eventually, forgive ourselves.
Visa hela texten

"Every page sparkles with sharp insight and keen observation. Mistakes were made-but not in this book!" -- Daniel Gilbert, author of Stumbling on Happiness "A revelatory study of how lovers, lawyers, doctors, politicians-and all of us-pull the wool over our own eyes . . . Reading it, we recognize the behavior of our leaders, our loved ones, and-if we're honest-ourselves, and some of the more perplexing mysteries of human nature begin to seem a little clearer." -- Francine Prose * O, The Oprah Magazine * "Entertaining, illuminating and-when you recognize yourself in the stories it tells-mortifying." * Wall Street Journal *

Dr. Carol Tavris's work as a writer, teacher, and lecturer has been devoted to educating the public about psychological science. She has spoken to students, psychologists, mediators, lawyers, judges, physicians, business executives, and general audiences on, among other topics, self-justification; science and pseudoscience in psychology; gender and sexuality; critical thinking; and anger. In the legal arena, she has given many addresses and workshops to attorneys and judges on the difference between testimony based on good psychological science and that based on pseudoscience and subjective clinical opinion. Elliot Aronson is currently Professor Emeritus at the University of California in Santa Cruz. He has long-standing research interests in social influence and attitude change, cognitive dissonance, research methodology, and interpersonal attraction. Professor Aronson's experiments are aimed both at testing theory and at improving the human condition by influencing people to change dysfunctional attitudes and behaviours. In 1999, he won the American Psychological Association's Distinguished Scientific Contribution Award, making him the only psychologist to have won APA's highest awards in all three major academic categories: distinguished writing (1973), distinguished teaching (1980), and distinguished research (1999).