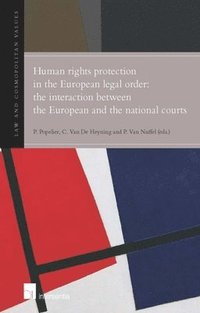 av Patricia Popelier, Catherine Van De Heyning, Piet Van Nuffel
Inbunden Engelska, 2011-06-30
1316
Köp
Spara som favorit
Ensuring the protection of human rights in Europe has become a highly complex exercise. Where courts are faced with a human rights claim, they not only have to examine the validity of that claim, but also need to have a clear understanding of the human rights catalogue that is to be applied, i.e. human rights as guaranteed by the national constitution, human rights as protected under EU law, based or not on the Charter, and human rights as identified in the European Convention of Human Rights. This book zooms in on various aspects of the interaction between courts in the complex European system of human rights protection. While other books take either a European or a national approach, this book studies both the co-existence between the ECtHR and the ECJ, and the impact of this dual mechanism of European human rights protection on the protection offered within specific EU Member States. This makes it valuable for academics and practitioners specialized in either fundamental rights, EU law or constitutional law.
Visa hela texten

'Overall the book covers interesting and manifold aspects of the interaction between the different authorities responsible for the protection of basic rights in Europe.' Stefan Kieber in Newsletter Menschenrechte (NLMR) 6/2011, 399 'The editors and contributors to this collection deserve praise for producing a very topical and stimulating book, which unlike many other edited books, is remarkably up to date. It can be highly recommended to everyone interested in this fascinating area of law.' Tobias Lock in 2012 E.L.Rev. 822

Catherine Van de Heyning is lawyer and specialises in Economic Criminal Law. She graduated as a Master of Laws from Antwerp University in 2006 and went on to obtain an LLM degree at University College London. In 2011 she was awarded the title of Doctor of Law for her thesis "Fundamental rights lost in complexity? The multilevel protection of human rights in the European legal space". She worked as a human rights researcher at Antwerp University and lectured at the University of Leiden before being admitted to the Bar in 2012. Catherine Van de Heyning is also a member of the Bar of Antwerp. Piet Van Nuffel studied at the Catholic University of Leuven (licentiate in 1991, doctor of law in 1999) and Harvard Law School (LL.M., 1993). His doctoral dissertation was awarded the Fernand Collin Prize 2000, and the Grote Europese Emile Bernheim Prize 2000. He worked successively as legal Secretary at the Court of the European Union (1999-2001), at DG competition of the European Commission (2001-2003) and as legal Secretary at the Court of Justice of the European Union (2003-2009). He is part-time lecturer in European law at the Catholic University of Leuven (since 2008), guest professor at the college of Europe (Natolin Campus, since 2004) and member of the legal service of the European Commission (since 2009).