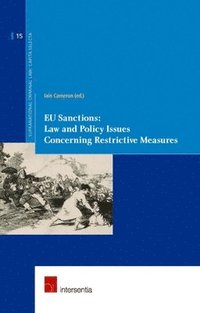 av Iain Cameron
Häftad Engelska, 2013-03-28
963
Köp
Spara som favorit
The famous "Kadi" cases have generated a wealth of articles dealing with the legal problems involved in EU implementation of UN Security Council sanctions. Less attention has been devoted to the numerous legal problems involved in the EU's own "autonomous" sanctions system. The subject is nevertheless topical since there is a growing use of sanctions and the legal basis for sanctions has been changed with the Lisbon treaty. EU sanctions are used both against regimes and suspected terrorist financing. But these sanctions have developed "organically", without sufficient thought being given to certain basic issues (inter alia concerning procedural fairness). This has resulted in considerable litigation before the Court of Justice (CJEU). The new legal basis and the recent judgments from the CJEU have solved some difficulties, but "taking sanctions seriously" means new problems for national implementation, spanning over a variety of areas: criminal law, constitutional law, international law and European law. The essays in this book, written by distinguished scholars in their respective fields, deal with some of these issues. How should we go about measuring the impact(s) of targeted sanctions? How coherent are these "administrative" measures of blacklisting with other existing and proposed EU measures in justice and home affairs promoting the criminal law model for dealing with the problem of terrorism (investigation, trial, conviction, punishment/confiscation of assets)? How can the problems caused for fair trial by the use of intelligence material be solved? If we can (or must) continue to have sanctions in the area of terrorist financing, can they be made compatible with fundamental principles of national criminal law and criminal policy? How does a system of "composite" decision-making (when the measure is partly national and partly at the EU level) avoid the risk that gaps arise in systems of legal protection? What is the spillover effect of "overbroad" quasi-criminal legislation directed at organizations, in the constitutional/human rights of freedom of expression and association? How do EU sanctions fit into, and compare to national systems for the proscription of terrorist organizations? Should the same legal safeguards be applicable both for "regime" sanctions and anti-terrorist sanctions?
Visa hela texten

Torbjorn Andersson Torbjorn Andersson is Dean of the Law Faculty at Uppsala University. He is Professor of civil and criminal procedural law and formerly Jean Monnet professor of EC law. His research areas are primarily Procedural Law, EU Law and Competition Law, in particular issues relating to the parallel and confl icting enforcement of law. Petter Asp Petter Asp is professor of criminal law at Stockholm university, Sweden, and holder of Ragnar and Torsten Soderberg Chair of Legal Science. His research has focused on international aspects of criminal law (EU criminal law, criminal jurisdiction, cooperation in criminal matters etc.) as well as on national criminal law (especially the general part of the criminal law and sentencing). He is a member of the European Criminal Policy Initiative which in late 2009 published a Manifesto on European Criminal Policy and is currently the head of a legislative committee with the task of reforming (parts of) the Swedish legislation on money laundering. Maria Bergstrom Maria Bergstrom is Associate Professor in European Law at Uppsala University. She was previously research fellow at Stockholm University. She defended her thesis at the European University Institute (EUI) in Florence in 2003. Her particular research interests are concerned with competence issues, changing boundaries and the interactive development of national and EU law, particularly within the fi elds of constitutional, administrative, penal and procedural law. She is currently conducting research on public-private cooperation and the EU functional notion of the state, the related accountability dilemma and antimoney laundering regulation. Her recent publications include "EU Anti-Money Laundering Regulation: Multilevel Cooperation of Public and Private Actors", in Eckes, C., and Konstadinides, T. (eds.) Crime within the Area of Freedom, Security and Justice: A European Public Order, CUP, 2011 and Bergstrom, M., Svedberg Helgesson, K, Morth, U., "A New Role for For-profi t Actors? The Case of Anti-Money Laundering and Risk Management", 49 Journal of Common Market Studies 1043 - 1064 (2011). Th omas Bull Th omas Bull is a judge in the Supreme Administrative Court. Prior to this he was Professor of constitutional law at Uppsala University. Amongst his publications are Regeringsformen - en kommentar (with Fredrik Sterzel) [the Instrument of Government - a commentary] 2010 and Motes- och demonstrationsfriheten. En statsrattslig studie av motes- och demonstrationsfrihetens innehall och granser i Sverige, Tyskland och USA: Freedom of Assembly, a public law study of the content and limits in the freedoms of assembly and demonstration in Sweden, Germany and the USA] 1997. Iain Cameron Iain Cameron is Professor in Public International Law at the University of Uppsala. His research interests lie in human rights, international criminal law and civil liberties. He holds an LLD and an LLM in International Law. He has published extensively in the fi elds of international law and constitutional law, particularly on international criminal law and human rights issues. He has investigated the issue of legal safeguards and targeted sanctions for the Swedish government (2002), the Council of Europe (2006) and the European Parliament (2008). Since 2006 he has been a member of the European Commission on Democracy through Law (Venice Commission). Christina Eckes Christina Eckes is associate professor in EU law at the University of Amsterdam and senior researcher at the Amsterdam Centre for European Law and Governance (ACELG). In 2012/2013, she is Emile Noel Fellow-in-Residence at New York University. Her current research project Outside-In: Tracing the Imprint of the European Union's External Actions on Its Constitutional Landscape is funded by the Netherlands Organisation for Scientifi c Research (NWO). She has widely published on EU external relations and EU counterterrorist sanctions, including a monograph entitled EU