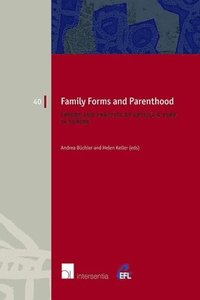 Family Forms and Parenthood: Theory and Practice of Article 8 ECHR in Europe

av Andrea Buchler, Helen Keller
Häftad Engelska, 2016-03-03
1139
Köp
Spara som favorit
Specialorder (osäker tillgång). Skickas inom 11-20 vardagar.
Gratis frakt inom Sverige över 159 kr för privatpersoner.
The European Convention on Human Rights has always had a significant influence on the development of family law in the different European national jurisdictions. However, at a time where family forms have been subject to a profound transformation characterised by the coexistence of a variety of family forms and where, at the same time, national family laws are converging, it is essential to properly understand the ECHR's influence on national family law. This book explains and analyses in depth the theory and practice of Article 8 ECHR with respect to family forms and parenthood. It examines how judgments of the ECtHR are received and implemented in a variety of Contracting States (Austria, Croatia, England and Wales, Germany, Greece, Hungary, the Netherlands, Poland, Spain, Sweden, and Switzerland) and how the judgments contribute to the shaping of domestic and European family law. Family Forms and Parenthood concludes with a detailed reflection on the relationship between the case law of the ECtHR and developments in national family law and jurisprudence. This is book is written for both the academic and professional readership.
Visa hela texten

Andrea B chler joined the University of Zurich as Professor of Law in 2002. She founded the Center for Islamic and Middle Eastern Legal Studies at the Faculty of Law of the University of Zurich in 2008. She is the co-director of the scientific board of the University Priority Research Programme Asia and Europe . In 2003, she co-founded the Center for Family Sciences, a Switzerland-wide association which initiates, conducts and supports high-quality research in the field of the family. She has been the co-leader of the training as a specialist solicitor in family law since 2007. She was awarded a fellowship at the Institute of Advanced Studies, Berlin, for the academic year 2008/2009. She earned her MA, Ph.D. and venia docendi in Private Law, Comparative Law and Gender Law between 1990 and 2002 at the University of Basle, Switzerland. She is a member of a number of legal research net-works and institutions both within and outside universities.