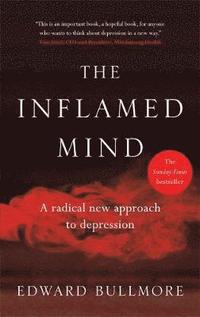 A radical new approach to depression

av Edward Bullmore
(2 röster)  |  Läs 1 recension
Inbunden Engelska, 2018-04-26
189
Köp
Spara som favorit
Skickas inom 5-8 vardagar.
Fri frakt inom Sverige för privatpersoner.
Finns även som
Visa alla 2 format & utgåvor
Worldwide, depression will be the single biggest cause of disability in the next 20 years. But treatment for it has not changed much in the last three decades. In the world of psychiatry, time has apparently stood still... until now.In this game-changing book, University of Cambridge Professor Edward Bullmore reveals the breakthrough new science on the link between depression and inflammation of the body and brain. He explains what we now know about how and why mental disorders can have their roots in the immune system, and outlines a future revolution in which treatments could be specifically targeted to break the vicious cycle of stress, inflammation and depression.The Inflamed Mind goes far beyond the clinic and the lab, exploring a whole new way of looking at how mind, brain and body all work together in a sometimes misguided effort to help us survive in a hostile world. It offers insights into the story of Western medicine, how we have got it wrong as well as right in the past, and how we could start getting to grips with depression and other mental disorders much more effectively in the future.
Visa hela texten

Too important to ignore. The Inflamed Mind is not only a dramatic breakthrough in our understanding of depression. It is an extraordinary exploration of what it is to be human.

Professor Edward Bullmore BA MB PhD FRCP FRCPsych FMedSci trained in medicine at the University of Oxford and then at St Bartholomew's Hospital in London. After working as a physician in the University of Hong Kong, he trained as a psychiatrist at St George's Hospital, the Bethlem Royal and the Maudsley Hospital in London, and as a clinical scientist at the Institute of Psychiatry, King's College London. Since 1999, he has been a Professor of Psychiatry at the University of Cambridge, where he is now Head of the Department of Psychiatry and Director of the Wolfson Brain Imaging Centre in the Department of Clinical Neurosciences. He is an honorary consultant psychiatrist and Director of Research and Development for Cambridgeshire and Peterborough NHS Foundation Trust. Since 2005, he has also worked half-time for GlaxoSmithKline and is currently leading an academic-industrial consortium for the development of new anti-inflammatory drugs for depression. He is a world expert in neuroscience and mental health.