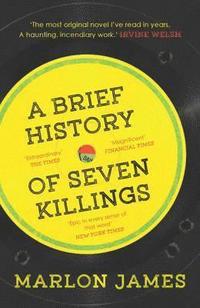 A Brief History of Seven Killings

WINNER OF THE MAN BOOKER PRIZE 2015

'Epic in every sense of that word: sweeping, mythic, over-the-top, colossal and dizzyingly complex.' * New York Times * 'A truly remarkable novel, crammed with a multitude of narrative voices, leaping across continents, reeking of sweat and gunpowder, slick with blood...As bold as literature can be'. * GQ * 'Violent, lurid, scabrous, hilarious and beautiful, this novel teems with life, death and narrators. A deserving winner of...the Man Booker prize by the first Jamaican to carry off the award'. * Economist Books of the Year 2015 * 'A vast, ambitious, burning mansion of a book, designed to reflect all the languages of its teeming island and the chambers of the human heart' * Irish Independent * 'Showcases the extraordinary capabilities of a writer whose importance can scarcely be questioned.' * Independent * 'A vivid plunge into a crazed, violent and corrupt world... executed with swaggering aplomb' -- Irvine Welsh '[James's] talent has grown from book to book, and his imagination consistently shines a light on dark and gory places...this is a work that explores the aesthetics of cacophony and also the aesthetics of violence.' * Guardian * 'Resembles James Ellroy's LA Quartet in its blistering violence, multiple voices and view of history "from the gutter to the star"' * The Daily Telegraph * 'Critics rave about James' mastery of both oral history storytelling and patois dialect, and his ability to craft and juggle perspectives that often contradict and obscure the truth. With comparisons to the works of David Foster Wallace and Quentin Tarantino, James has garnered the highest of contemporary praise.' * Wired 10 Best Books of 2014 * 'This tense and violent, but very compelling, novel is a big book in more ways than one.' * The Herald * 'A brilliant novel' -- Library Journal 'Scary and lyrically beautiful - you'll want to read whole pages aloud to strangers.' -- Russell Banks 'Not only persuasive, but tragic, though in its polyphony and scope it's more than that ... the book's increasing sense of absurdity, its pop culture references, its compulsive ventriloquism and its range of tones - comic, surreal, nightmarish, parodic - began to remind me uncannily of David Foster Wallace's all-or-nothing Infinite Jest.' * New York Times Book Review *

MARLON JAMES was born in Jamaica. He is the author of the Man Booker Prize-winning novel, A Brief History of Seven Killings (Oneworld 2014), which also won the American Book Award and the Anisfield-Wolf Fiction Prize, was a finalist for the National Book Critics Circle Award, and featured in over twenty best books of the year lists. His debut novel, John Crow's Devil (Oneworld, 2015), was a finalist for the Los Angeles Times Book Prize, shortlisted for the Commonwealth Writers' Prize, and was a New York Times Editors' Choice, and his second novel, The Book of Night Women (Oneworld, 2009), won the Dayton Literary Peace Prize and the Minnesota Book Award, and was a finalist for the National Book Critics Circle Award. Black Leopard, Red Wolf (Hamish Hamilton) was published in 2019. He teaches at Macalester College, Minnesota, USA.