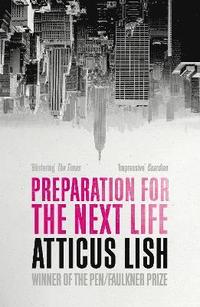 Preparation for the Next Life

Winner of the 2015 PEN/Faulkner Award for Fiction

av Atticus Lish
Häftad Engelska, 2016-02-04
119
Köp
Spara som favorit
Skickas inom 5-8 vardagar.
Gratis frakt inom Sverige över 159 kr för privatpersoner.
Finns även som
Visa alla 1 format & utgåvor
'BLISTERING' THE TIMES * 'EXTRAORDINARY' FINANCIAL TIMES *Winner of the New York City Book Award for Fiction* *Finalist for the PEN/Hemingway Award for Fiction* New York Times Best of 2014 Wall Street Journal's Best of 2014 Vanity Fair's Best of 2014 Publishers Weekly's Best of 2014 BuzzFeed's Best of 2014 New York Times 100 Notable Books of 2015 Set in the underbelly of New York, Preparation for the Next Life exposes an America as seen from the fringes of society and, in devastating detail, destroys the myth of the American Dream through two of the most remarkable characters in contemporary fiction. Powerful, realistic and raw, this is one of the most ambitious - and necessary - novels of our time.
Visa hela texten

'Extraordinary, challenging and...thrilling...So simple, so heartbreaking, so very, very good'. * Independent * '[An] unfailingly vivid and engaged portrait of life on the margins of society' * Financial Times Books of 2015 * 'Punches its way, bare-knuckled, through every millennial New York novel centring around middle-class intellectual characters... kicking typical tales of artsy, east-coast intelligentsia romance into a dumpster. But its real target, sought out with a heat-seeking precision, is far weightier, and that is America itself' * Observer * 'Extraordinary... "Make it new" was Ezra Pound's exhortation... Lish does exactly that... astonishing... nothing less than a triumph, worthy of every heroic adjective a critic could throw. It is a reminder, plain and simple, of what fiction is for' * FT * 'Powerful... Lish writes with rare confidence... he doesn't forget that a good love story should break your heart' * Metro * 'A blistering novel... bigger than the sum of its parts. I can think of no better recent fiction book to read as the presidential election circuit gears up.' * The Times * 'Atticus Lish is a writer on a stratospheric rise, and rightly so...the book is getting plenty of attention for all the right reasons' * Irish Independent * 'This book is a masterwork.' * Alan Warner, author of Morvern Callar * 'Impressive.. Charged with breathless momentum... substantial and beguiling...This is, in the end, a profoundly political book' * Guardian * 'Here is a raw first novel with a low center of gravity. Set in Queens, it dilates upon blinkered lives, scummy apartments, dismal food and bad options. At its heart is a love story between a Chinese immigrant and a veteran of the Iraq war. Mr. Lish's narrative is intense, moving and somehow necessary.' -- Dwight Garner * New York Times, 2014 Books of the Year * 'A raw, sharply rendered love story, a stark portrayal of New York, an unsparing autopsy of the Bush years, and as ambitious and impressive a debut as you could wish for'. * Irish Times * 'Extraordinarily powerful... The burning intensity of the prose... fully absorbs all the detail... Lish's remarkable debut fuses raw realism with narrative poetry to truly memorable effect' * Sunday Times * 'A significant contribution... striking... [Lish] isn't catching a mood but building a world... we look to long novels for richness, not perfection, for power, not precision, so we should savour Lish's audacity and open heart, his refusal to coddle or console' * Daily Telegraph * 'Magnificent... one of the best recent novels I have read about work as it exists for millions of people... attests to a more profound and intimate knowledge of how life functions on the margins' * New Statesman * 'The finest and most unsentimental love story of the new decade.' * New York Times * 'A tragedy-bound love story with a gritty contemporary setting...Lish's matter-of-fact style somehow manages to elevate the everyday and urban into an art form...There is an echo here of T. S. Eliot or...The Great Gatsby'. * Third Way Magazine * 'Extraordinary, challenging and...thrilling'. * Belfast Telegraph * 'Deeply moving' * Carnegie Europe * 'A stunning debut novel... Lish's prose is at once raw and disciplined, and every word feels necessary.' * Publishers Weekly * 'Will pull you in... completely compelling and persuasive... a New York which you won't read about that often... poetic... there's a beautiful exactness' * RTE * 'Importan[t]...Lish excels at dialogue' * Literary Review * 'Astonishing, gorgeous... It is hard to imagine a more daunting task for a novelist than to say something new about 9/11. Preparation for the Next Life is dizzying in its ambition and exhilarating in its triumph.' Clancy Martin, -- Clancy Martin * New York Review of Books * 'A tremendous book, relentless, moving, written in prose of marvellous integrity. Now that America and the novel are dead, I hope we can have more great American novels as alive as this one

Atticus Lish is the author of Life is With People. The son of legendary writer and editor Gordon Lish, he has worked in a Styrofoam factory, as a construction labourer, a personal trainer, moving man, security guard and telemarketer. He served a brief stretch in the Marine Corps in the war-free period between Gulf One and 9/11. He lives in New York.