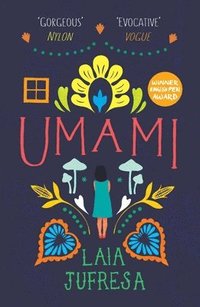 av Laia Jufresa
Häftad Engelska, 2017-04-06
119
Köp
Spara som favorit
Skickas inom 7-10 vardagar.
Fri frakt inom Sverige över 159 kr för privatpersoner.
Finns även som
Visa alla 1 format & utgåvor
It started with a drowning. Deep in the heart of Mexico City, where five houses cluster around a sun-drenched courtyard, lives Ana, a precocious twelve-year-old still coming to terms with the mysterious death of her little sister years earlier. Over the rainy, smoggy summer she decides to plant a vegetable garden in the courtyard, and as she digs the ground and plants her seeds, her neighbors in turn delve into their past. As the ripple effects of grief, childlessness, illness and displacement saturate their stories, secrets seep out and questions emerge - Who was my wife? Why did my mom leave? Can I turn back the clock? And how could a girl who knew how to swim drown? Using five voices to tell the singular story of life in an inner city mews, Umami is a quietly devastating novel of missed encounters, missed opportunities, missed people, and those who are left behind. Compassionate, surprising, funny and inventive, it deftly unpicks their stories to offer a darkly comic portrait of contemporary Mexico, as whimsical as it is heart-wrenching.
Visa hela texten

'Ms Jufresa: Where the f*#! did you learn to tell a story so well?' * Alvaro Enrigue, author of Sudden Death * 'A lovely novel about family, friendship and community that is told through multiple points of view from people living in a small development in Mexico City. The range in characters from the recently widowed landlord, to the twenty year old "spinster" struggling to eat, to the girl building a milpa whose sister recently passed, all beautifully ties together through community, allowing for the exploration of many kinds of grief.' * BookRiot * 'Umami is a debut novel that I am afraid has been criminally under-read, a slim book about community and loss that somehow doesn't feel as heavy as it could. Told from multiple perspectives within a building complex in Mexico City, it feels as if the early chapters are short stories with little in common, but Laia Jufresa magically layers them on top of each other, illuminating the secret sorrows that connect them all. It's beautifully translated by Sophie Hughes, a tall order because of the different kinds of language all of the characters use. In the end, Umami isn't resolved in the ways a traditional novel would be - but it's satisfying and moving.' * Barrie Hardymon, NPR * 'Umami is narrated by a child - a very, very funny child - as she grapples with the death of her sister. The novel expands to the lives of her neighbors in Mexico City, and something very special happens as their stories begin to intersect and merge. File this under the "makes-you-a-better-person" heading.' * Paste Magazine * 'Jufresa's evocative portrait of contemporary Mexico blends whimsy with poignancy. Guaranteed to challenge and move you.' * Vogue * 'Umami offers the enticing prospect of a vast and filthy megalopolis being opened up'. * Independent * 'Umami is true to its whimsical premise, the narrative a little sweet, a little salty, by turns bitter and sour. Very umami, and very funny at times despite the tragedies that mark each household. The setup could admittedly become tired over 250-plus pages, but Jufresa also works an innovative structure that leaves the reader questioning until the end.' * Reading Group Choices * 'In Umami, language itself is a character. The talents of Sophie Hughes are displayed in Marina's constant wordplay which comes alive in her sensitive and playful translation. Jufresa's talent for neologism and her inventive structure give the novel a lightness of touch that never undermines its revelations, but rather enhances them.' * Culture Trip * 'This book is such a gentle and sensitive deep dive into the cycles of mourning and loss out of which families are made and unmade, terrifying and uncanny, without ever losing sight of the daily banalities of hearth and home and love. Cooked to perfection, ready to serve.' * Literary Hub * 'Grief, though, is neither defined by culture nor constrained by time. Yes, Jufresa could have written Umami the "normal" way - a single perspective in chronological order with first person the whole way through - instead of this backwards telescope, alternating voices and switching perspectives between first and close third. That version of Umami would be a dark, bitter thing, like molasses in the coffee grounds. Instead, Jufresa and Hughes offer a version that is complex without weight, a saffron puree. Dynamic and delicate, Umami draws our attention without pretense.' * Rumpus * 'Jufresa directly appeals to any reader who was once a 12-year-old girl obsessed with Agatha Christie (*cough* me), but also, and truly, this is a gorgeous book that meditates on loss and grief, healing and redemption, and also offers an enchanting look into life in contemporary Mexico.' * Nylon Magazine * 'A tale of five lives in one block in Mexico City's inner city - in a complex designed with human tastebuds in mind - this sad and funny novel has already snagged awards, and was dubbed an "international h

Laia Jufresa was born in Mexico City. Laia's work has been featured in several anthologies and magazines such as Letras Libres, Pen Atlas, Words Without Borders and McSweeney's, and she was named one of the most outstanding young writers in Mexico as part of the project Mexico20. In 2015 she was invited by the British Council to be the first ever International Writer in Residence at the Hay Festival of Literature. She currently lives in Cologne, Germany. Sophie Hughes is a literary translator and editor living in Mexico City.