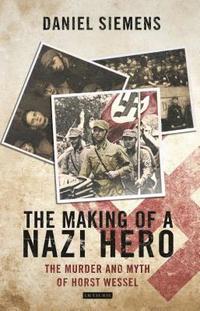 The Making of a Nazi Hero

The Murder and Myth of Horst Wessel

av Daniel Siemens
Inbunden Engelska, 2013-02-02
329
Köp
Spara som favorit
Skickas inom 5-8 vardagar.
Fri frakt inom Sverige för privatpersoner.
Finns även som
Visa alla 2 format & utgåvor
On 14 January 1930, Horst Wessel, a young and ambitious member of the SA was shot at close range at his home in Berlin. Although the crime was never completely solved, the murder was most likely committed by a group of communists with close ties to the city's gangland. Wessel later died from his injuries. Joseph Goebbels, whose attention had already been drawn to Wessel as a possible future Nazi leader, was the first to recognize the propaganda potential of the case. 'A young martyr for the Third Reich' he wrote in his diary on 23 February 1930 immediately after receiving the news of Wessel's death. This was the beginning of the myth-making that transformed an ordinary individual into a masculine role model for an entire generation. Two months later, thousands of people lined the streets for Wessel's funeral parade and Goebbels delivered a graveside eulogy. In the years that followed - and as Nazi power increased - Horst Wessel became the hero of the Nazi movement - with his elaborate memorial quickly becoming a site of pilgrimage. The song Die Fahne Hoch for which Wessel had written the lyrics (and which subsequently became popularly known as the Horst Wessel Song) became the official Nazi party anthem and the Berlin district of Friedrichshain, where Wessel was murdered was renamed Horst-Wessel-Stadt in his honour. Numerous biographies and films followed. Using previously unseen material, Daniel Siemens provides a fascinating and gripping account of the background to Horst Wessel's murder and uncovers how and why the Nazis made him a political hero. He examines the Horst Wessel 'cult' which emerged in the aftermath of Wessel's death and the murders of revenge, particularly against Communists, committed by the SA and Gestapo after 1933. At the same time, the story of Horst Wessel provides a portrait of the Nazi propaganda machine at its most effective and most chilling.
Visa hela texten

Daniel Siemens - delivers trustworthy historical revelations concerning the Wessel material while reading - as excitingly as a crime story with an ominously long track of blood. Die Zeit This book could be used as a standard reference on the essential details of the Nazi technique of domination - and its consequences. Der Tagesspiegel Siemens has unrolled a spectacular criminal case. A gripping and fact-rich historical study. WDR (Western German Broadcasting) It has been years since I have read a book dealing with the early Nazi years with as much interest, excitement and admiration. Robert M. Citino, Central European History A brilliantly researched and highly readable account of the life and death of Horst Wessel, the today largely forgotten creator of the official anthem of National Socialism. Thomas Weber, author of Hitler's First War In this masterful book, Daniel Siemens tells the gripping story of how a small-time SA firebrand became a celebrated Nazi martyr. Beautifully written and assiduously researched, Siemens provides a penetrating account of political radicalism and violence in the Weimar Republic, and of terror, propaganda and popular mobilization in the Third Reich. An outstanding work of history. Nik Wachsmann, Birkbeck, University of London Excellent...thoroughly readable text, which tells its complex story with considerable elan...Siemens has delivered an outstanding work of history, which illuminates and educates, yet wears its considerable erudition lightly...Siemens has raised the flag for serious, well-written, accessible history... Roger Moorhouse, BBC History Magazine, June 2013

Daniel Siemens is an historian of Weimar and Nazi Germany and DAAD Francis L. Carsten Lecturer in Modern German History at the School of Slavonic and Eastern European Studies (SSEES), University College London.