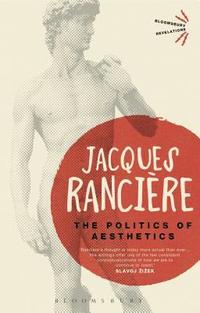 The Politics of Aesthetics

The Distribution of the Sensible

av Jacques Ranciere, Gabriel Rockhill
Häftad Engelska, 2013-04-25
224
Köp
Spara som favorit
Kan levereras innan julafton!
The Politics of Aesthetics rethinks the relationship between art and politics, reclaiming "aesthetics" from the narrow confines it is often reduced to. Jacques Ranciere reveals its intrinsic link to politics by analysing what they both have in common: the delimitation of the visible and the invisible, the audible and the inaudible, the thinkable and the unthinkable, the possible and the impossible. Presented as a set of inter-linked interviews, The Politics of Aesthetics provides the most comprehensive introduction to Ranciere's work to date, ranging across the history of art and politics from the Greek polis to the aesthetic revolution of the modern age. Available now in the Bloomsbury Revelations series 10 years after its original publication, The Politics of Aesthetics includes an afterword by Slavoj Zizek, an interview for the English edition, a glossary of technical terms and an extensive bibliography.
Visa hela texten

"Jacques Ranciere is one of the most important and original contemporary French philosophers. This book provides perhaps the best available introduction to his thought in English. Its main contents are two interviews with Ranciere...they provide an extraordinarily concise and systematic summary by Ranciere of the main themes of his recent work across its whole range. Ranciere's project is promising. It is illuminating to see aesthetics as political and politics in aesthetic terms, as a form of the 'distribution of the sensible.'" -Culture Machine -- Culture Machine "[A]n excellent introduction to Jacques Ranciere...Slavoj Zizek writes in his afterword: 'Ranciere's thought is today more actual than ever: in our time of the disorientation of the left, his writings offer one of the few consistent conceptualizations of how we are to continue to exist.'" - London Review of Books, August 3, 2006 -- London Review of Books 'Ranciere has insightful and novel things to say about the problems that beset our understanding of modernity as it applies to art.' * Modern Painters, March 2005 * 'Locating the political significance of art has not only gone out of fashion, it has in recent years become a source of embarrassment. No one has argued against this repression with more precision, nuance, and undeniable force than Jacques Ranciere ... This book, with an emphatic "Afterword" by Zizek, provides a riveting and compelling outline of the central elements of Ranciere's politics of aesthetics and its relation to his demanding rethinking of the political.' -- J.M. Bernstein, New School for Social Research 'A benchmark, this compact book shows why Ranciere is one of the most compelling thinkers and writers in France since Michel Foucault and Gilles Deleuze.' -- Tom Conley, Harvard University, USA 'This is possibly the most important essay, despite its length, since Adorno's Aesthetic Theory.' -- Adrian Rifkin, Professor of Visual Culture, Middlesex University, UK 'A tour de force! Through a revitalisation of the term 'aesthetics', Ranciere is able to raise novel questions concerning the nature of history, the sense of our modernity, the relationship between work and art and between science and art, and the peculiarity of aesthetic experience (showing, in essence, that it cannot be contained but informs all our forms of life and activities).' -- Keith Ansell Pearson, Professor of Philosophy, Warwick University, UK 'The readership for Ranciere's work is highly interdisciplinary. Le Partage du sensible would be obligatory reading in graduate courses in Philosophy, Aesthetics, Political Science, French Studies, Literature, and Cultural Studies, where it would be read in the context of other major thinkers of politics and aesthetics such as Walter Benjamin, Jean-Paul Sartre, Roland Barthes, Jacques Derrida, Etienne Balibar, Michel Foucault, Paul Ricoeur, Jurgen Habermas, Jean-Francois Lyotard, and Slavoj Zizek.' -- Kristin Ross, Professor of Comparative Literature, New York University, USA

Translator's preface: The Reconfiguration of Meaning Translator's Introduction: Jacques Ranciere's Politics of Perception \ The Politics of Aesthetics \ Foreword \ The Distribution of the Sensible: Politics and Aesthetics Artistic Regimes and the Shortcomings of the Notion of Modernity \ Mechanical Arts and the Promotion of the Anonymous \ Is History a Form of Fiction? On Art and Work \ Interview with Jacques Ranciere for the English Edition: The Janus-Face of Politicized Art \ Historical and Hermeneutic Methodology \ Universality, Historicity, Equality \ Positive Contradiction \ Politicized Art \ Afterword by Slavoj Zizek: The Lesson of Ranciere \ Appendix I: Glossary of Technical Terms \ Appendix II: Bibliography of Primary and Secondary Sources \ Index.