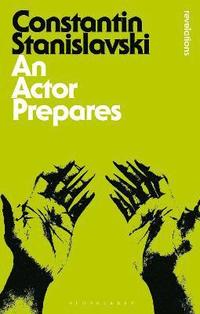 av Constantin Stanislavski
Häftad Engelska, 2013-04-25
210
Köp
Spara som favorit
Finns även som
Visa alla 5 format & utgåvor
An Actor Prepares is the most famous acting training book ever to have been written and the work of Stanislavski has inspired generations of actors and trainers. This translation was the first to introduce Stanislavski's 'system' to the English speaking world and has stood the test of time in acting classes to this day. Stanislavski here deals with the inward preparation an actor must undergo in order to explore a role to the full. He introduces the concepts of the 'magic if' units and objectives, of emotion memory, of the super-objective and many more now famous rehearsal aids. Now available in the Bloomsbury Revelations series to mark the 150th anniversary of Stanislavski's birth, this is an essential read for actors, directors and anyone interested in the art of drama.
Visa hela texten

Konstantin Stanislavski (1863-1938) was a Russian director who sought 'inner realism' by insisting that his actors find the truth within themselves and 'become' the characters they portrayed. His work brought international fame to the Moscow Art Theatre, which he had co-founded with Vladimir Nemirovich-Danchenko in 1897. During his early years at the Moscow Art Theatre, he directed the first productions of Chekhov's Uncle Vanya (1899), Three Sisters (1901) and The Cherry Orchard (1904) as well as a series of celebrated versions of Shakespeare. Stanislavski toured America with the company in 1923. After World War II, the US edition of Stanislavski's treatise An Actor Prepares (1926) became a bible of the Method school of acting.

Note by the Translator 1. The First Test 2. When Acting is an Art 3. Action 4. Imagination 5. Concentration of Attention 6. Relaxation of Muscles 7. Units and Objectives 8. Faith and a Sense of Truth 9. Emotion Memory 10. Communion 11. Adaptation 12. Inner Motive Forces 13. The Unbroken Line 14. The Inner Creative State 15. The Super-Objective 16. On the Threshold of the Subconscious Index