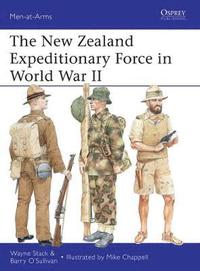 av Wayne Stack, Barry O'Sullivan
Häftad Engelska, 2013-03-06
139
Köp
Spara som favorit
Skickas inom 7-10 vardagar.
Fri frakt inom Sverige över 159 kr för privatpersoner.
Finns även som
Visa alla 2 format & utgåvor
In 1939 more than 140,000 New Zealanders enlisted to fight overseas during World War II. Of these, 104,000 served in the Second New Zealand Expeditionary Force. Initially thrown into the doomed campaign to halt the German blitzkrieg on Greece and Crete (1941), the division was rebuilt under the leadership of MajGen Sir Bernard Freyberg, and became the elite corps within Montgomery's Eighth Army in the desert. After playing a vital role in the victory at El Alamein (1942) the 'Kiwis' were the vanguard of the pursuit to Tunisia. In 1943-45 the division was heavily engaged in the Italian mountains, especially at Cassino (1944); it ended the war in Trieste. Meanwhile, a smaller NZ force supported US forces against the Japanese in the Solomons and New Guinea (1942-44). Fully illustrated with specially commissioned colour plates, this is the story of the Second New Zealand Expeditionary Force's vital contribution to Allied victory in World War II.
Visa hela texten

"This 48-page paperback documents how New Zealand contributed one of the Allies' most mobile and reliable army divisions to achieving victory. The Kiwis' stirring story is vividly illustrated with photos and striking color plates by Mike Chappell." --Toy Soldier & Model Figure (August 2013)

Bloggat om The New Zealand Expeditionary Force in Wo...

WAYNE STACK was a frontline member of the New Zealand Police for 18 years, before deciding on a career change to follow his lifelong passion for military history. In 2011 he wrote Osprey's MAA 473, The New Zealand Expeditionary Force in World War I, and in 2012 completed a PhD thesis at the University of Canterbury, on the New Zealand Army officer corps of 1909-45. He lives with his wife and two children in Christchurch, New Zealand. BARRY O'SULLIVAN is a renowned collector, author and researcher of pre-1945 New Zealand militaria. Hi is the co-author of two volumes on New Zealand Army uniforms and equipment covering the period 1910-45, and was an advisor on and contributor to Wayne Stack's MAA 473. Barry lives with his wife and two children in Christchurch, New Zealand. MIKE CHAPPELL enlisted as a teenage private in the Royal Hampshire Regiment in 1952, and retired in 1974 as RSM of the 1st Battalion The Wessex Regiment (Rifle Volunteers), after seeing service in Malaya, Cyprus, Swaziland, Libya, Germany, Ulster and home garrisons. He began painting military subjects in 1968, and has gained worldwide popularity as a military illustrator. Mike's two sons have both followed military careers, and he and his wife currently live in France. Since 1978, Mike has written 20 Osprey titles, and this is the 103rd title - in the Men-at-Arms, Elite, Vanguard, Warrior, Aircraft of the Aces, and Combat Aircraft series - for which he has painted the colour plates, in whole or in part.