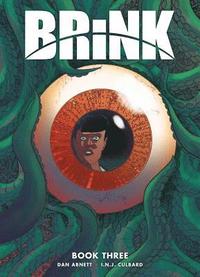 av Dan Abnett, I N J Culbard
Häftad Engelska, 2019-05-16
169
Köp
Spara som favorit
Skickas inom 5-8 vardagar.
Fri frakt inom Sverige för privatpersoner.
Beställ boken senast tisdag 15 december kl. 11:30 för leverans innan julafton
Humanity is on the brink in the thrilling conclusion to the smash-hit epic space-noir from duo Dan Abnett and INJ Culbard. OVER THE BRINK Inspector Bridget Curtis is drawn deeper into a disturbing plot that runs from the drug-fuelled sects of the Habitats, to the upper echelons of Junot Corp. Strange things are happening, but is the conspiracy real, or is life in space beginning to affect her sanity? The reality of sinister Space Gods aside, the fate of the human race may be at stake!
Visa hela texten

Dan Abnett is a multiple New York Times bestselling author and an award-winning comic book writer. He has written more than forty-five novels, including two books for younger readers. In comics, he is known for his work on Guardians of the Galaxy and The New Deadwardians. A regular contributor to 2000 AD, he is the creator of series including Grey Area, Kingdom and the classic Sinister Dexter. He also writes screenplays, and has written extensively for the games industry, including the forthcoming Alien: Isolation and Shadow of Mordor. Dan is published in well over a dozen languages and has sold millions of books worldwide. He was educated at St Edmund Hall, Oxford, and lives and works in Maidstone, Kent. Dan's blog and website can be found at www.danabnett.com.